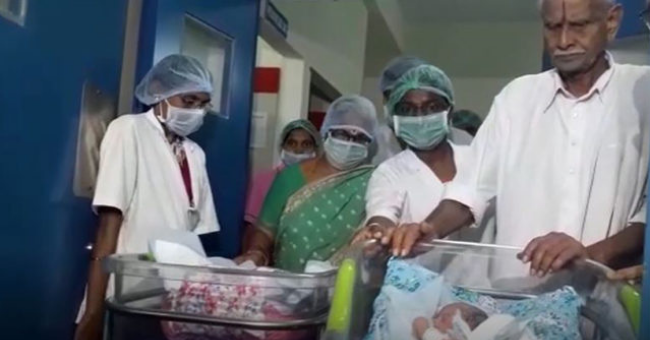 Reports say a 74-year-old woman in the southern Indian state of Andhra Pradesh is now the oldest woman to ever give birth… and she had twin girls, no less!

Mangayamma Yaramati delivered her daughters, who each weighed around 2.2 pounds, via Caesarean section last Thursday. Her doctor has reported that babies and mother are all doing well.

Yaramati and her husband, who is 82 years of age (!!), have told reporters that they have wanted children for decades, but that it wasn’t possible for them on their own. The couple has been married for 57 years- what a long time to wait and hope. They also shared that the hardest parts of being infertile is how they were stigmatized in their village for being childless.

“We tried many times and saw numerous doctors, so this is the happiest time of my life,” she told the BBC.

The twins were conceived via IVF, using her husband’s sperm and a donor egg, since Yaramati has already undergone menopause.

There is currently some deliberation on her actual age, but reports have said that Yaramati produced a birth certificate proving she is 74 years of age. If it can be proven, she has become the oldest woman to ever give birth according to the Guinness Book of World Records, beating a woman in Barcelona, Spain named Maria del Carmen Bousada Lara, who gave birth to twin boys in 2006 at just under 67 years old.

The twin girls’ births have again raised debate over the ethics of advanced-age births. There are many who believe that it is unethical for parents of such an old age to be impregnated, because, more than likely, they will not be around for their child’s early life. Still others, like the couples’ doctor, believe that giving birth is a “fundamental right”, and are happy to provide aid toward achieving this goal.

At the end of the day, there are going to be people who have strong opinions on all types of parents, parenting styles, and decisions. What do you think?