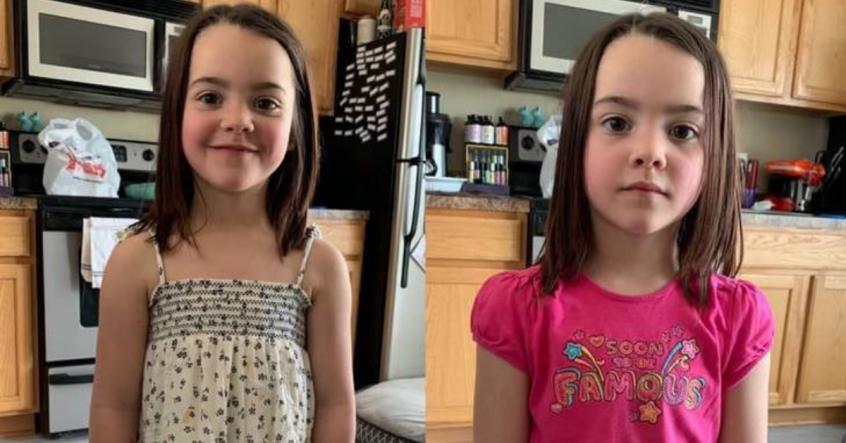 We live in a time that is full of change. One major wave that I’m happy to ride is women and girls being treated fairly in the workplace, at home, in legislation, and everywhere else they can be found.

Unfortunately, though, things still happen to the contrary of progress, and will continue to, unless we speak up and out, as one mom in Minnesota did when her daughter came home wearing completely different clothing than she left for school in.

Ok this is gonna be long. The picture on the left is showing what my daughter was wearing to school this morning. The…

Emily Stewart’s 5-year-old daughter was excited to wear a brand-new dress her grandmother had gotten her. On top of it complying with the set-forth dress code, the Midwest was experiencing an unseasonably warm snap after a winter storm, and as people often are, she was excited to be able to shed the winter layers in their 65-degree-weather.

Emily sent her off to Kindergarten wearing her dress, with jeans underneath, and a sweater on top. As she says in her post, “It didn’t occur to me that an adult would look at my 5 year old child and think that wearing a dress was inappropriate.”

It wouldn’t have occurred to me, either.

When her daughter got home from school, she was wearing unrecognizable clothes, the dress she had been wearing nowhere in sight. She told her mom that she was made to go to the nurse’s office to change. The nurse told her that she, “needed to cover her body.”

I asked her when I picked her up “why are you wearing a T-shirt?”
She said “I was told I had to put something on because I need privacy.”
I then asked “how did that make you feel when they told you that?”

She was excited to wear that dress to school and show her friends and play in it on the play ground.

She said to me “I don’t know why they told me I couldn’t wear my dress it was super embarrassing.”

How do I teach a little girl that what she wears and her appearance is not nearly as important as her education and self development when things like this happen?

As a mother, I am incensed at the very thought of this happening for so many reasons. Why are teachers and school staff sexualizing a 5-year-old’s body? Why are her shoulders something that need covering? Why does she need privacy for wearing a perfectly decent, adorable outfit- and one that didn’t even break the school’s dress code?

I would have been downright livid at the thought of my young daughter feeling shame over wanting to feel beautiful in a special dress. There is no reason such a young child needs to feel any shame over her body; the idea that grown adults would demonstrate that a widely-visible portion of her child’s body is sexual is just wrong. Add on top of that the embarrassment of having to leave your classroom, in front of all of your peers, and return in different clothing? It makes me feel anxious, and I’m a grown woman.

One comment on the post, by a woman named Holly Marshall Crowley, sums up so many feelings I have when I read this story.

For all the ridiculous dress code rules out there, I have never had to bring clothes to any of my boys because of it but have for my daughter. All because she was wearing black leggings, a long t-shirt and a baggy cardigan. Not a stitch of flesh showing that wouldn’t normally show and still she was called out for it and made to change. I see the reasons for some dress code rules but when the boys can turn their shirt inside out or use a piece of rope as a belt and think they are cool and the girls are shamed it’s a problem. What better way to teach our sons how to be appropriate around girls in a working environment than to get them to interact with females dressed normally. Instead we insist on dressing girls to cover anything the boys might be attracted to and so losing a teachable moment and also giving them terrible judgement for the future.

There is a bright spot in all of this, though. Emily Stewart didn’t take this lying down. She didn’t just send angry words out into the universe: she went straight to the source and made a change. Because of her boldness in speaking up, the school formally changed their policies, and now administrators are no longer able to make judgment calls on the appropriateness of a child’s outfit.

Stories like this are always hard to hear about, but when they have to do with such a small child, it’s even more difficult. I’m glad that parents are standing up for their children, and administration is willing to listen and change. What do you think?

3 Comments on “5-Year-Old’s Outfit Deemed Inappropriate at School, so Her Mom Took Action”