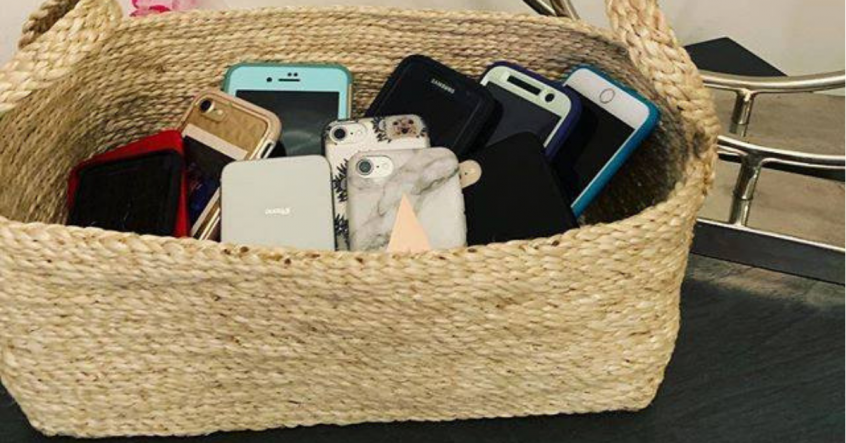 Technology has taken off at breakneck speeds, it seems. Not just 15 years ago was I T9 texting my friends with my very first colorless cellphone. No internet, no videos, no frills. Never could we have imagined what would continue to evolve in the world of cellphone technology in such a short time!

Because of these advances and how prolific technology now is, many parents are finding ways to help control their children’s usage. From special apps, time limits and filters, there are basic approaches as well as some more creative ones.

Writer, speaker, and mother Glennon Doyle is one of those innovative mothers.

In a post that quickly went viral with hundreds of thousands of interactions across her social media channels, Doyle shares what she and her wife, Olympic soccer star Abby  Wambach, do when their kids’ friends come over.

I love my kids’ friends so much that I want them to talk to each other at our house. So Abby and I have them check their…

That’s exactly what it looks like- a basket right by the front door for their phones to be dropped into upon entering. It’s so simple, but somehow so revolutionary, isn’t it?

I love my kids’ friends so much that I want them to talk to each other at our house. So Abby and I have them check their phones at the door. Which we can do cause we’re the bosses of this house. They all act exasperated but seem interestingly relieved. Then, after a minute, they look at each other. And talk. And dance and laugh and stuff. And they remember that they are with their friends so there is no need to be anywhere else.

I was mentally slow clapping as I read that. As you can imagine, though, opinions are strong and mixed.

Many comments echo sentiments that I myself had. “We have the same rule!! And our kids friends always say how much fun they have at our house and always want to come back. Coincidence? I think not!!”

It’s sad that today, the way things are, we have to make a concerted effort to get kids (and not just kids, but all people) to look up and engage with those around them. I think it’s beautiful that, as Glennon herself puts it, she loves her kids’ friends so much.

But there are plenty who disagree.

One such comment reads, “Nope, don’t touch my child’s phone.” Another, “Sorry, while it’s tempting to want to force children to enjoy their social time the way we did as children, because we feel it’s ‘better’, at the end of the day, technology isn’t going away. If someone told me I couldn’t have access to my phone in order to socialize I’d be incensed.”

Color me not surprised.

Many parents were quick to mention their kids with anxiety, and how they need their phones to save them from their introversion. Somehow, though, when a number of moms shared their child’s response to this photo, it often went something like this actual comment: Last night watching the Bachelor (don’t judge) my sixteen year old says, “they can’t have their phone while they are on this show. That would be nice to have a break from phones.

It’s no surprise that there is a strong link between phone use, social media, and anxiety and depression. It worries me that parents are fighting for more unfettered and constant access to these devices, rather than against, like Glennon. Sure, technology is good. It has its place. In my opinion, though, the fabric of our society is interaction, and we’re losing it.

What do you think about Glennon’s house rule? Would you do the same?