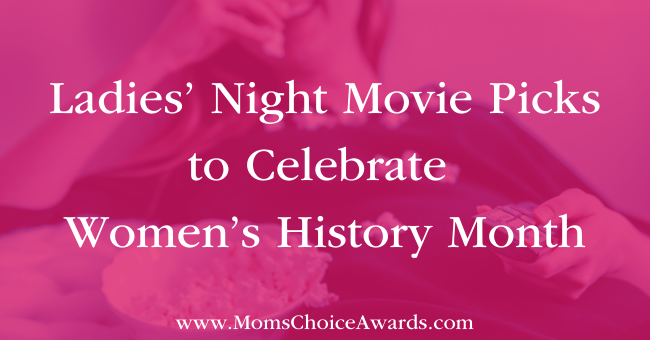 One of my favorite quotes of all time comes from the title of Laurel Thatcher Ulrich’s book “Well Behaved Women Seldom Make History.” Ulrich’s title speaks volumes on its own, showcasing the truth that the most notable women in history did not just sit at home and twiddle their thumbs – they looked at their world and took it upon themselves to change their lives. These are the women that made Women’s History Month possible.

Women’s History Month is a great opportunity to celebrate these women and ladies everywhere who are doing amazing and wonderful things. So, for the first week of March, it’s time to call all your favorite women together for a ladies’ movie night. Let your hubby know that he’s in charge of the kiddos so you can get your gal group together for a Women’s History Month-themed girls’ night! We have included movies ranging in ratings, so if you enjoy them with your favorite ladies and decide to bring the family-friendly ones home to celebrate Women’s History Month with your children and show them the strong women who inspire you, we know they’ll love them too!

Make your favorite finger foods, grab a bottle of your favorite wine, and sit down to watch one of our picks for movies centered around amazing women who went above and beyond to make their world a little brighter.

This 1997 biopic takes a deeper look into the life and career of singer Selena Quintanilla- Pérez, starring Jennifer Lopez as the titular character. The film follows the discovery of Selena’s talent by her father, Abraham, and his decision to create a band with her as the lead singer and his other children as band members. We watch Selena as she grows in popularity as a member of Selena and the Dinos, falls in love, and gets married. As Selena’s career continues to become brighter, she meets Yolanda Saldivar, eventually leading her on a tragic journey. “Selena” shows the world the strength and kindness of the late young star, showcasing the love Selena garnered in her short time on earth.

The 2013 biographical drama “Betty and Coretta” stars Mary J. Blige and Angela Bassett as Dr. Betty Shabazz and Coretta Scott King, the widows of renowned Civil Rights leaders and activists Malcolm X and Martin Luther King, Jr. After the assassinations of their husbands, these strong women carry on as single mothers and worked to keep the dreams of their husbands alive. The two develop a strong friendship with one another that spans 30 years, uniting to become leaders for the Civil Rights Movement and role models for women all over the world. Betty and Coretta show us the strength in all mothers and women, going down in history as icons of Women’s History Month.

For those looking for an older movie starring the marvelous Barbra Streisand, the 1968 musical “Funny Girl” might be the one for you! “Funny Girl” is a deep dive into the life and career of comedian and Broadway star, Fanny Brice and her rocky relationship with Nicky Arnstein. The relationship between Brice and her entrepreneur, gambler husband was tumultuous and full of many ups and downs, but Fanny Brice continued to work and raise her daughter even while she was on her own. A great pick for ladies’ night, you and your favorite women will be inspired by the strength of Brice and the talent of the leading lady, Barbra Streisand, both of whom should be recognized as historical figures this Women’s History Month.

This 2016 film looks at the amazing accomplishments of three inspiring NASA mathematicians: Katherine Johnson, Mary Jackson, and Dorothy Vaughan. These three women worked tirelessly to create equal opportunity in a segregated environment, proving that neither the color of your skin or the skirt you wore had any effect on your talent and intelligence. Ultimately, these three women went above and beyond to aid America in their efforts to win the Space Race, creating lasting changes in NASA and earning recognition as women who “refused to be limited by society’s expectations of her gender and race while expanding the boundaries of humanity’s reach.”

The French 2009 “Coco Before Chanel,” directed by Anne Fontaine and starring Audrey Tautou, tells the story of fashion designer Coco Chanel. Though beginning her life in poverty and living at a French orphanage, Chanel works hard to rise above her social status. Her dream becomes more real as she becomes acquainted with French high society, where she is noticed for her talent in design and making beautiful and popular hats. This leads her on a journey of love and success, one that all the women watching “Coco Before Chanel” will be inspired by this Women’s History Month.

“A Quiet Passion,” a 2016 biopic written by Terence Davis and starring Cynthia Nixon as poet Emily Dickinson. The film follows the iconic and reclusive poet’s life, from her beginnings as a young schoolgirl to her later life, where she lived as a reclusive and underappreciated artist. It wasn’t until after she died in 1886 that Dickinson becomes notable for her poetry, leading to intensive studies and analysis of her works all over the world. Though she never married or had children, Dickinson proved that it is by our own merits that our name exists in history, showcasing the necessity for her inclusion in celebrations of Women’s History Month.

This biopic, released in 2000, follows the triumph of single mother Erin Brockovich over a Californian power company responsible for the pollution of a nearby city’s water. Throughout the film, Brockovich is looked down on because of how she dresses and speaks, but it is her hard work at the firm of attorney Ed Masry that brings down the corrupt Pacific Gas and Electric Company. By the end of the film, Brockovich proves herself to be a talented investigator and a woman of the people.

The 2015 film “Bessie,” starring Queen Latifah as blues singer Bessie Smith, centers on Smith’s transformation from a struggling young singer to her title as “The Empress of the Blues.” Bessie Smith begins her career as a young orphan from Nashville, where she experiences racial oppression as producers refuse to feature a dark-skinned African American woman in their shows. Bessie meets Ma Rainey, a traveling performer who takes her in and coaches her on how to increase her talent. Bessie’s popularity grows, and with her emerging career comes many obstacles – including an attack by the KKK and a series of rocky relationships. After she experiences many hardships, Bessie emerges a stronger woman who continues to follow her dreams throughout her life.

For this month’s ladies’ night, we hope you will enjoy the films inspired by the amazing women who made history and deserve recognition this Women’s History Month. May they inspire you to be the woman you dream to be.