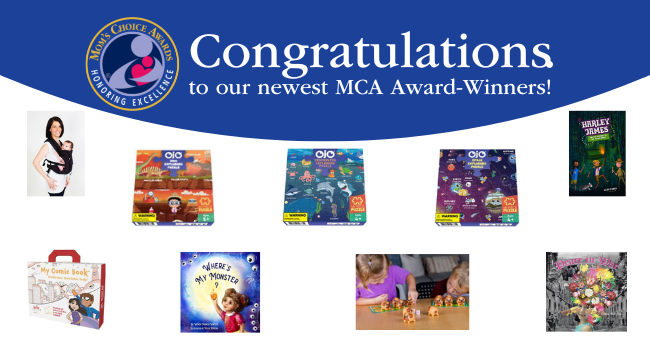 This week’s roundup of Mom’s Choice Award winners features children’s picture books, educational puzzles, baby products + more! Be sure to scroll through the entire list so you don’t miss any of our new award-winners! All the items you see below won a Mom’s Choice Award during June 12, 2022 to June 18, 2022.

Every week companies, inventors, and publishers from around the world send us their products for evaluation. Only the best earn our designation.

From award-winning children’s book author, Wendy Monica Winter, M.Ed., comes her latest book filled with not-so-scary scary monsters. Enjoy the beautiful watercolor illustrations by Yulia Popova as you join Lucy on her adventure and witness her secret power. Does she have the courage to LOVE where all others have FEARED?

Am empowering story to teach children to never underestimate the power of facing their fears!

Explore the Underwater world with our educational science puzzle for kids! This beautiful 48 piece children’s puzzle is perfect for both boys and girls ages 4+. It features amazing underwater creatures of all sizes, from the most-loved to the less well-known. This is a giant, beautifully illustrated puzzle of the fascinating underwater ecosystem that inhabits the world’s oceans and seas.

Learn sea creature names and fun facts about fishes and the oceans as your child completes the puzzle. Also included in the box is a ocean themed trivia quiz for extra play.

The pugs ate all the lollipops! Luckily their tongues are dyed the color of the lollipop they had! Each turn, try to match two lollipops on the dice with two squishy pugs that you think licked them! When you gently squeeze the little pups, their tongue comes out! No matter how cute these chubby pugs are, they will not get away with this… The first player to match 6 pugs with lollipops’ colors wins the game!

Explore space with our educational science puzzles for kids! This beautiful 48 piece children’s puzzle from OjO Games is perfect for both boys and girls ages 4+.

Learn planet names and fun facts as your child completes the puzzle. Also included in the box is a space themed trivia quiz for extra play.

Designed by an occupational therapist, the PöpNgo is essential to every modern family in need of a practical, simple, comfortable baby carrier. It offers an innovating carrying system favourable to the baby’s development, from birth to early childhood. Its 100% organic cotton.is soft on baby’s skin and ideal year-round for indoor and outdoor use. Lightweight and extremely compact, it takes very little space and be easily carried using its included transport bag.FeaturesFrom birth to early childhood (8 to 35 lbs – 3 to 15 kg).Wide seating and a support cushion for newborns (8 – 12 lbs) included.A simple and innovating system of adjustments to fit a wearer of any size.5 carrying positions according to age, level of arousal and activity.Padded shoulder straps wearable crossed or in parrallel.Adjustable head support and padding under the thighs.Made of 100% organic woven cotton.Packaged in its own reusable bag in the colours of the PöpNgo.Designed and made in Canada.

This is a great book to help discuss the current world events. It is a peaceful calming way to explain the war. At times in the world we see anger, betrayal, hurt and fear. This book gives children a concrete example of how to transmute those difficult emotions into something positive. Something small they can do to bring joy, life,love, and peace into our world. We see people yelling we can change the outcome by holding hands to discuss our issues calmly. We see anger we can change the energy by looking at a new perspective. We see sadness and we can bring a loving smile and a warm hug. We see war we can change the world by bringing peace. Peace in War demonstrates a simple approach to transmute the fear and hurt into Peace and Love. Lets plant peaceful solutions into the world and create the world we have ALL been dreaming of. Make Peace a reality for our children and our children’s children. We need more peace in the world be the change, choose the peace.

Encourage a child’s love for drawing, storytelling and comics with the award-winning My Comic Book, a complete kit for writing, illustrating, and publishing their very own comic book. From super heroes to true stories, My Comic Book brings a child’s imagination to life as they follow their character’s adventures on the pages. Comic book lovers of all ages can create a lasting keepsake through the fun and educational process of creating their own comic book. This kit is an ideal gift for kids to help build self-esteem, advance literacy skills, and inspire creativity.

Will Harley Find the Missing Mayan Statue & Save the World?

Amateur cryptologist Harley James has just landed in the sticky jungle of Tikal, Guatemala—home to the famous Mayan ruins. She’s made a few friends, a few mistakes…and a ground-breaking discovery.

The legendary statue of the long-lost Mayan King.

Just as she is about to impress her father with her discovery, the statue is stolen. Right from her own room!

And what’s worse? The legend says if the statues of the three kings are reunited, they’ll bring back an army from the dead to rule the world.

Follow along with Harley as she tracks down the missing Mayan statue, solves a few riddles and stumbles upon a secret society that will change her life forever!

Explore the world of Dinosaurs with our educational science puzzles for kids! OjO’s 60 Piece Puzzle features some of the most-loved dinosaurs of our past, and their present day fossils. In this colorful and beautifully illustrated puzzle, learn about the tools that paleontologists use to discover fossils. Also included in the box is a dinosaur themed trivia quiz for extra play.