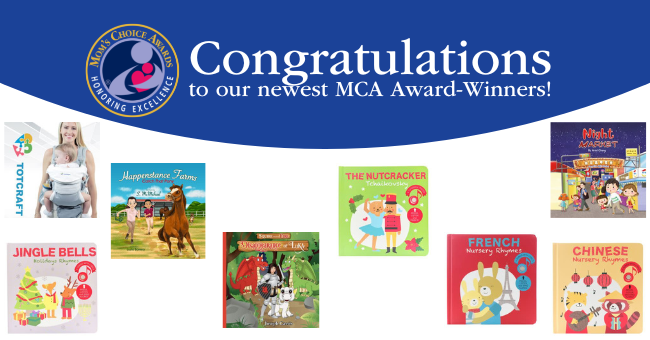 This week’s roundup of Mom’s Choice Award winners features baby products, children’s picture books, holiday books + more! Be sure to scroll through the entire list so you don’t miss any of our new award-winners! All the items you see below won a Mom’s Choice Award during May 29, 2022 to June 04, 2022.

Every week companies, inventors, and publishers from around the world send us their products for evaluation. Only the best earn our designation.

TotCraft baby carrier is the only carrier on the market that is made from 100% organic GOTS certified cotton which is the highest designation of organic textile. Also the infant carrier is OCS certified which insures that the product is made of at least 95%-100% of organically grown materials. TotCraft baby carrier has also very unique features i.e lumbar support, bottle holder, removal storage unit for phone or accessories, removable washable teething pad and is built with cushy shoulder straps to provide optimum comfort to the parent. With Lifetime warranty, we insure 100% satisfaction.

An introduction to the beautiful music of this ballet favorite through six classic Tchaikovsky pieces. Text and attractive illustrations convey the balletʼs magical mood, and the music inspires little dancing feet.

Luka, a unique white dragon, must face being bullied by other dragons who make fun of his quirky look and lack of ability to breathe fire. While hiding from the mean dragons, Luka discovers that he has a superpower to DISAPPEAR. His best friend, Squire Mackenzie, finds him in the woods and is at Aww.

While walking home, they spot Luka’s parents, Sparky and Spitfire, frantically searching for their runaway child. Once together, Mackenzie realizes that her village and castle have been set ablaze by the Vikings. Using Luka’s newfound superpower to become invisible, the knights and dragons overcome the invaders.

Luka’s courage makes him a hero.

From this medieval adventure story, your child will learn to appreciate the challenges of bullying and how differences make us all special.

Gigi experiences the Taiwanese night market with her parents. You will enjoy Boba milk tea, Mango shaved ice, Stinky tofu, games and lots of shopping with Gigi! ! It is a fun story to educate children about Asian food culture.
This book will expand your children’s horizon by learning Taiwanese food. It is also a great educational source for traveling and Asian Culture (AAPI).

This seasonal sound book with attractive illustrations in seasonal colors accompanied by music introduces little ones to the pleasure of Christmas carols. A perfect way to celebrate the holiday season.

When young Sophia is introduced to her new pony, Piper, things don’t go as smoothly as planned. Could it be that Sophia isn’t the only one who is nervous about new things?

Sophia and her best friend Savanna are at the barn when their trainer, Miss Ellen, presents Sophia with her new pony, Piper. But when Piper pins her ears back and snorts, Sophia knows that the pony isn’t happy and is scared. The two need to get to know each other to build trust. Does Sophia have what it takes to rein in her pony and gain Piper’s trust?

Throughout the week, Sophia becomes sad and frustrated as she tries her best with Piper—being kind, gentle, and patient—but the pony only kicks up her hooves and raises her head away in distrust. When Sophia needs to go out to get Piper from the pasture, the pony runs away and the chase is on! Before long, Sophia, Savanna, and even Eli the dog are chasing after the pony. Does Sophia have what it takes to rein in her pony and gain Piper’s trust? With a little faith in herself first, Sophia and Piper are soon soaring together.

This book entertains with favorite French tunes, including Frère Jacques. Singing in several languages is enriching for children and adults alike.

Children’s Picture Books:
Bilingual (Must include an English translation)

This book entertains with favorite Chinese tunes, including Pull up carrots. Singing in several languages is enriching for children and adults alike.

Children’s Picture Books:
Bilingual (Must include an English translation)