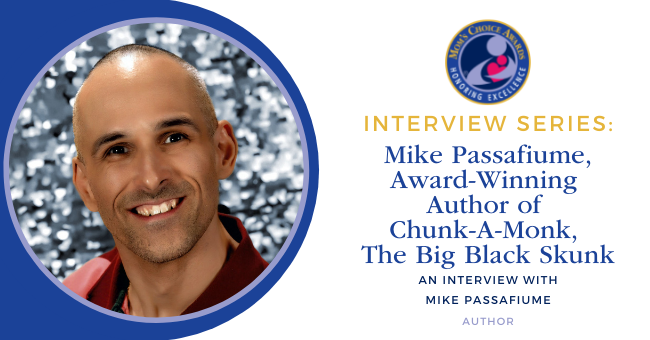 MCA: Hi Mike, congratulations on your MCA! Chunk-A-Monk, The Big Black Skunk is a great story that tackles a huge issue this country has been facing for quite some time, and that is the issue of bullying in schools. Bullying is detrimental to so many families, and that’s why reading books such as Chunk-A-Monk, The Big Black Skunk to children is so important. I’d first like to start the interview by finding out a little bit of background about yourself! 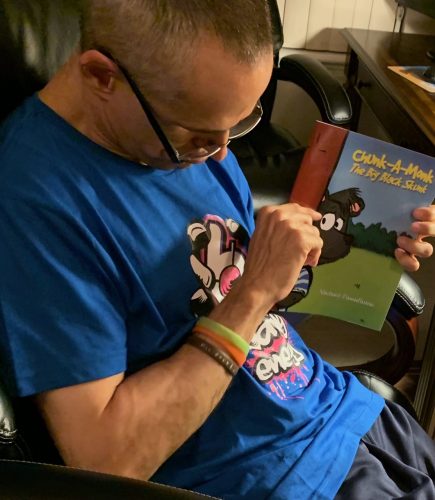 Mike Passafiume with his book, “Chunk-A-Monk, The Big Black Skunk”

Mike: Prior to becoming a Central Florida resident in the late 1980s, I am originally from Chicago, Illinois. I would say my earliest memory of gravitating towards the sports world was 1985 when I was seven years old. Since then, sports pretty much shaped my life in all aspects even though I could never play due to being born with Cerebral Palsy. I supposed as you will find out later, that is why I began writing sports as a freshman in high school. Sports is the reason I chose to attend the small university, (Lynn University) I did in South Florida, I had aspirations of becoming a basketball coach. I actually got involved in coaching with the women’s varsity basketball team in high school and just so happened the head coach’s cousin was an assistant with the men’s team. Long story short, I ended up there due in large part to their commitment to me trying to help me achieve my goal.

MCA: It’s wonderful you were able to follow your true passion in life and make a career out of it! Was it your sports writing that led you to eventually becoming a children’s book author?

Mike: I began writing sports as a freshman in high school on the school newspaper. Prior to that, I had no writing experience. I enjoyed it, so much so that I majored in Communications/Journalism in college where I continued my sports writing endeavors for the school paper as well.

I do not believe there was any inspiration behind becoming a writer, just something I enjoyed doing. I guess you might say that due to having CP, which at times can affect my speech somewhat, that I find there are no limitations/restraints/constraints on any keyboard keystrokes, it is free expression.

Perhaps that got me thinking, how can I make a difference with the keyboard? How can I contribute to having a positive influence in some facet with keystrokes? The act of bullying has become so out of hand since I grew up, and growing up with Cerebral Palsy.  Luckily for me, however, I had an extremely fortunate time growing up. Of course, there had to be those one or two outliers in my case, but other than that my childhood was thoroughly enjoyable compared to what children now are forced to face daily. It is funny, the first time my mom read the book she thought I was the main character.

A mother reading “Chunk-A-Monk, The Big Black Skunk” to her child

Mike: Actually, Chunk-A-Monk, The Big Black Skunk came to be after my friend told me she knew the person who wrote the Albino Alligator children’s book, Danielle. Danielle said she wanted to do a children’s book with me because she liked the way I wrote. Though I went to college for Communications, I told her I don’t know anything about writing kids’ books. That same night after hearing about the Albino Alligator for the first time, my thoughts were what other animals don’t often get written about. After brainstorming for a while, I said skunk. I said how about an all-black skunk missing its white stripe and she liked the idea. I knew the title had to be catchy & fun to stand out and capture attention. I said Chunk-A-Monk because that is what she called her baby nephew, she loved it. I thought it was really good too, as it was fun & catchy, plus, have we, not all used the term Chunk-A-Monk in one capacity or another? Thus, the title Chunk-A-Monk, The Black Skunk came to be.  That was all thought of in 2009.

So why did the idea just sit on a bookshelf for 12 years and collect dust until January? I guess life happens, the funny thing about it, we all have our plans, our timelines, and such, but I guess things will come to fruition when they are supposed. The idea never left me, as everyone can see, it was always sitting there waiting to be born. In 2017, Danielle passed away unexpectedly, with the idea still in my head, and that is why you see the dedication to her in the book. If it were not for her pitching me this book idea in the first place, there would not be any Chunk-A-Monk, the Big Black Skunk.

I do not know how it really happened. One day in 2018, I just sat down and started typing. Maybe it had something to do with Danielle’s passing, I do not know. All I know was that two days later, I had my first rough draft, then my second came, then the third, etc. As I passed it around to friends of mine who were writers and teachers, the common feedback was “it’s too long.” My second draft became shorter than my first, my third shorter than my second, it got to the point where if I shorten it anymore there would not be a story. Frustration is real, and it was here that frustration grew, so much so that the idea went back on the shelf until this past October when I revisited it again. I rewrote the last half of it, did not care how long it was, I got caught up in that too much the first time, so I just wrote, as writers do. I liked how it came out better the second time than the first anyhow. Once completed, I figured if I did not see all the way through this, it was never going to get published. I can finally say I am glad I saw it through! The message is quite telling with hopes of educating young readers on the seriousness of bullying.

It is funny how we all have so many different thoughts on a given day. Some just pass by like shooting stars, while others never actually do leave us. Believe it or not, the ideas that do not leave are likely to be good ideas. So let that be a lesson, if you have an idea simmering in your head, it does not matter how old, or how much dust is on it, it is probably a pretty good one. One where some kind of action needs to take place.

MCA: That is a really strong message and one that I’m sure we can all learn from. Can you tell us about how Chunk-A-Monk, The Big Black Skunk educates its young readers on the seriousness of bullying?

Mike: In this book, Splitter teaches children what kids go through far too often in a realistic fashion when one is bullied. He shows them why it is important to accept others, no matter the differences one may have from everyone else. It also teaches children that all have differences that make each of us special. Simply realize that you are unique, and it is crucial to embrace your uniqueness and individuality in a positive sense rather than a negative one. He teaches children, empathy, and kindness which many can relate to. There is a need for children to read books like these and to understand what others feel like or who can, unfortunately, relate to Splitter just because one appears to be different.

MCA: Why was it important for you to highlight the issue of bullying in Chunk-A-Monk, The Big Black Skunk?

Mike: As you’ve stated earlier, one in five kids report being bullied in some facet. Chunk-A-Monk, The Big Black Skunk tries to teach young readers to love themselves no matter what. Even though bullying is a very enormous and serious issue in our society, the book is done in a fun, light-hearted, entertaining way for young readers to enjoy, but, yet still very educational with its huge message that the book is intending to get across.

Chunk-A-Monk, The Big Black is trying to get the word out in efforts of reaching young readers out there who might read this book to have a positive effect/influence on him/her learning great life values all children need to be taught while realizing bullying is not okay, nothing about it is ok, it is detrimental to so many families!

MCA: Experiencing bullying can absolutely be crushing to children and their families. What has the response to Chunk-A-Monk, The Big Black Skunk been like from your readers? 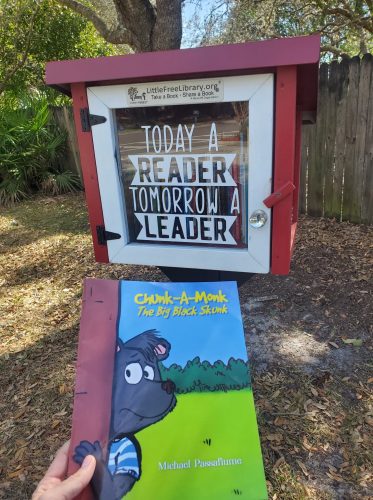 “Chunk-A-Monk, The Big Black Skunk” available in a free library

Mike: The response has been 100 percent positive. A bit overwhelming to an extent. My publisher said from the beginning, after reading my original draft, that he likes everything about it. Some of my friend’s children have taken the book to share with their classmates. A couple of parents I know have donated copies to respective schools/teacher’s libraries which all have been exciting to hear of. I knew the book contained a strong message, the question I had was, could I deliver it in a fun-simplistic way that children would grasp the moral of the story this being the first time ever doing this? I just had so many unanswered questions this being my very first book.

Now with the book being out since January, the hard part, probably even more difficult than writing Chunk-A-Monk and seeing it to the finish is to make parents, teachers, and just people in general aware of this book to help spread bullying awareness and anti-bullying messages.

Mike: As I said earlier, the act of bullying is so detrimental to not only the kids who are bullied, but it affects the entire family.  No parent wants to see their child bullied, and when it’s their child on the receiving end of the act it affects everyone involved.  It is a life-changing act that either kids are too young to understand the consequences of or they, themselves are not being raised and educated correctly at home. Let’s be honest, for a child to bully another child, something somewhere is a miss at home when it comes to educating and teaching children good morals, values, and ethics.

So, children may bully other children, however, this entire bullying epidemic could easily vanish and not exists if only if some parents would take more of an active role in childhood development teaching their child, “the right’s, from the wrong’s”.

Unfortunately, having said all that, we all tend to associate “bullying” with children and adolescents as we all found out a couple of months back with Dustin Diamond’s death, putting off chemo treatment until he had no choice due to the fact, he was afraid of getting bullied too according to his friend. The act is not just limited to the younger age groups and it raises this thought…If an adult does not want to deal with being bullied, how hard must it be for kids to deal with it?

MCA: Thank you for spreading such an important message with our MCA readers!

You can learn more about Mike Passafiume and his award-winning book, Chunk-A-Monk, The Big Black Skunk by visiting his MCA Shop pages. 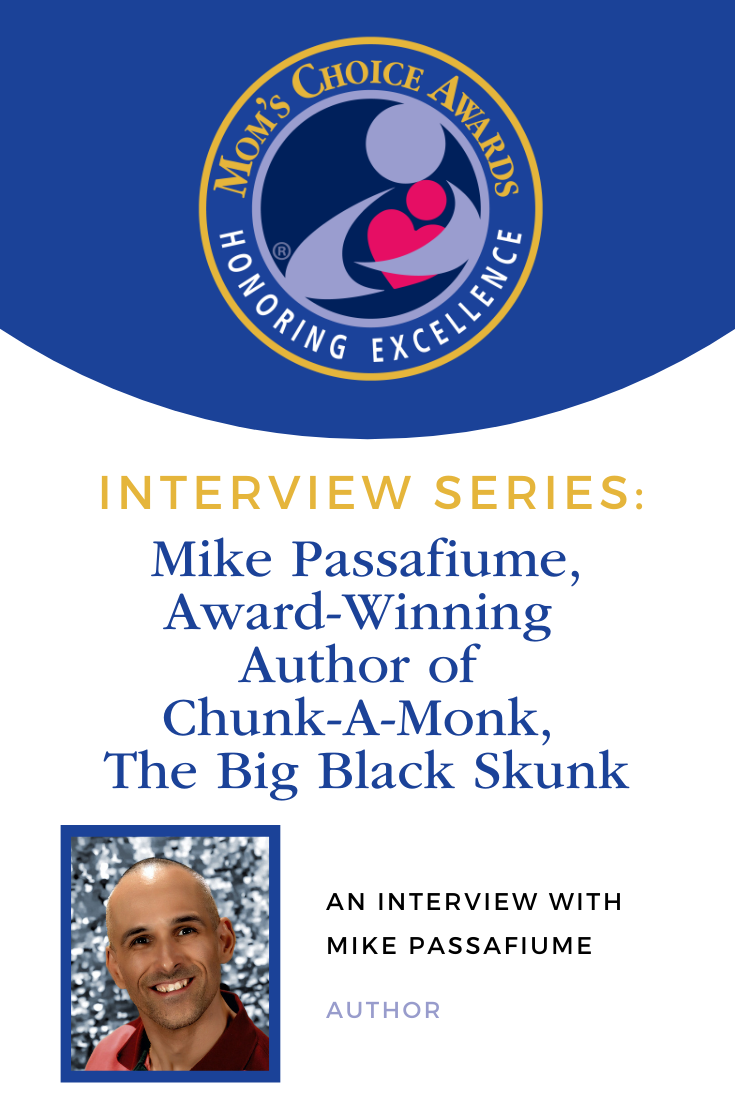