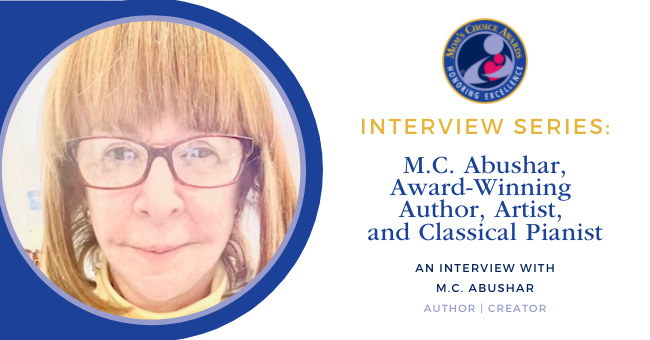 Greetings, Mom’s Choice readers! We hope this finds you well. Thanks for joining us for another installment of our interview series. We are privileged to speak again with Mom’s Choice Award-winning Author M. C. Abushar, who wrote and illustrated the MCA award-winning first title in the “Tyler, the Rabbit series: Tyler’s Promised Gift.” Her second title in the series: “Tyler’s Baby Sister” has also received the MCA award. Now, her third title in the series, “Tyler’s Acting Practice” has just won the same MCA award and is M.C.’s fourth overall book to win a Mom’s Choice Award. This interview is the second one she does with us! All of M.C.’s books about Tyler are unique, and she has the ability to write in a style that is directed to the mind of children under the age of 10. Any child who reads any of the stories in the “Tyler, the Rabbit” series is guaranteed to become invested. Keep reading to learn more about Mary (M. C.) and her journey of becoming an award-winning author!

MCA: Hi Mary! It is so nice to catch up with you again. Congratulations on yet another Mom’s Choice Award! It’s been a little over a year since we last spoke with you. Can we start the interview with you updating us briefly about your background and what you’ve been up to since our last interview? 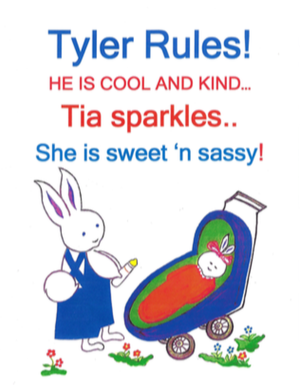 Tyler and Tia, the Rabbits.

M.C.: I was born at the American University Hospital in Beirut when my father was a professor at the American University. After several visits to the U.S. with my family when my father was visiting Professor at schools of pharmacy at different universities here, I am now settled in California, where I served as an elementary parochial school principal for 19 years, then resigned to devote my time to writing and illustrating the children’s book series about “Tyler, the Rabbit.” My aim was to write the stories in simple language that a child would feel was being recounted by one of his/her peers, therefore taking its message to heart and becoming engaged in every narrated event recounted.

I am skilled in writing with direct, child-like language and style that gently leads each child to feel a close connection with the characters in the stories. This child-centered unfolding of the plot is intended for the purpose of guiding every child who is listening or reading to desire to adopt the values and moral precepts modeled by the hero, Tyler, the Rabbit gradually and naturally. The description is deliberately phrased to make Tyler’s character appear attractive and appealing to its target audience of ages three to nine. From the beginning to the last sentence in each book, the action proceeds at the pace a child would follow and understand comfortably. An adult would only arrive at a fair assessment of the impact, meaning, as well as the importance of these stories by observing a child’s reaction while listening to or reading one of them, or by interviewing a child and paying close attention to the opinion given by the child. This applies to every story in this series because adults are not the target audience for whom this uniquely child-designed style of writing was intended, and for whom it imparts the ideal outcome.

I mastered the skill of speaking and listening to a young child in the same manner that another child the same age would speak because I needed to hear the child’s candid point of view whenever a teacher sent a student to me to be disciplined for an infraction that he/she was being accused of committing. I wished to hear the child’s personal account of the incident before determining what consequence should be applied. This skill was acquired by repeated practice to make each child feel comfortable and at ease in my presence.

Since my last interview with MCA, I won an award for “Tyler’s Acting Practice,” I rewrote “Tyler’s Promised Gift” in French, entitled “Cadeau Promis À Tyler,” and participated successfully in the 2020 Frankfurt Book Fair.

MCA: That’s quite an interesting background you have! It is wonderful that you can make such a connection with young children through your writing. Where did you get your inspiration for your newest story, Tyler’s Acting Practice? 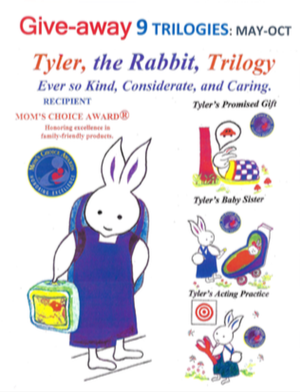 M.C.: I wrote “Tyler’s Acting Practice” to help children address and resolve bullying incidents. I believe that it is crucial to the emotional well-being of all children to know that they can transform those experiences into positive and successful outcomes for everyone involved. This can be achieved whether they are witnessing someone who is being bullied or being the target of bullying themselves.

MCA: Bullying is a major issue right now that certainly needs to be addressed as much as possible. What are some of the key lessons found in Tyler’s Acting Practice?

M.C.: Some of the key lessons in “Tyler’s Acting Practice” is how to turn the bullies’ disrespect and rejection of their victim into admiration and respect by showing them how capable and skillful the targeted victim of their bullying really is, thus causing them to replace their disdain and belittlement with admiration, respect, love, and inclusion. The message is conveyed indirectly but clearly, while the child is enjoying the suspense in the plot and being entertained.

MCA: This is your fourth book to win an MCA and third in the “Tyler” series. How does this book differ from its predecessors?

M.C.: This book differs from its predecessors mainly in its dealing with a topic that children ages three to five do not fully comprehend, which is “bullying in the schoolyard”. It is best suited for children ages six to nine because they would understand the motives behind the incidents as well as appreciate the happy resolutions to a greater degree.

MCA: How do the illustrations and text within Tyler’s Acting Practice convey a child’s thoughts and emotions?

M.C.: When the text of the story describes the sadness of Joel, the student who was excluded from basketball practice, the illustrations depict Joel sitting alone on the bench outside the principal’s office looking sad and dejected. On the other hand, when Joel becomes hopeful that his image may be reversed and redeemed, a happy and cheerful expression appears on his face. On the final page of the book, when the child who is following the story understands Joel’s emotion of pride of achievement, and the reason for Tyler’s peace of mind after having acted with loyalty towards his friend Joel, the child’s comprehension becomes enhanced and enriched by the highly expressive illustrations of the faces of the main characters in the story.

M.C.: The readers’ responses range from the younger ones (under six) expressing that they did not understand the purpose of Tyler’s sacrifice to rescue a friend from being bullied to the older children’s responses of its being an outstanding and helpful story.

M.C.: The lesson of the story would be not to become sad or resigned to accepting an incident of bullying, whether one is a witness or a victim, but to take positive action to reverse the bullies’ disrespect by demonstrating how capable and worthy of respect the target of their bullying is. 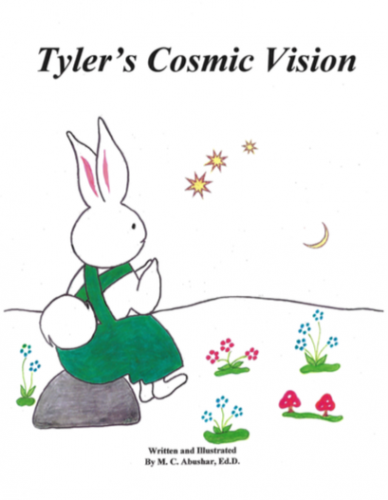 M.C.: I look forward to providing more enriching and rewarding listening or reading experiences for children. The fourth story about “Tyler, the Rabbit” will be entitled “Tyler’s Cosmic Vision.” It will involve all members of Tyler’s family, including his father, mother, and his sister Tia. The setting will be a stroll in the park on a Sunday afternoon. The lesson for children will be not to wander far from their parents in public places so as not to risk getting kidnapped by a stranger. Tyler will be seeking help from the cosmic world of angels.

MCA: Thank you for another great interview, Mary!

You can learn more about M.C. Abushar and her award-winning book, Tyler’s Acting Practice by visiting her MCA Shop pages. 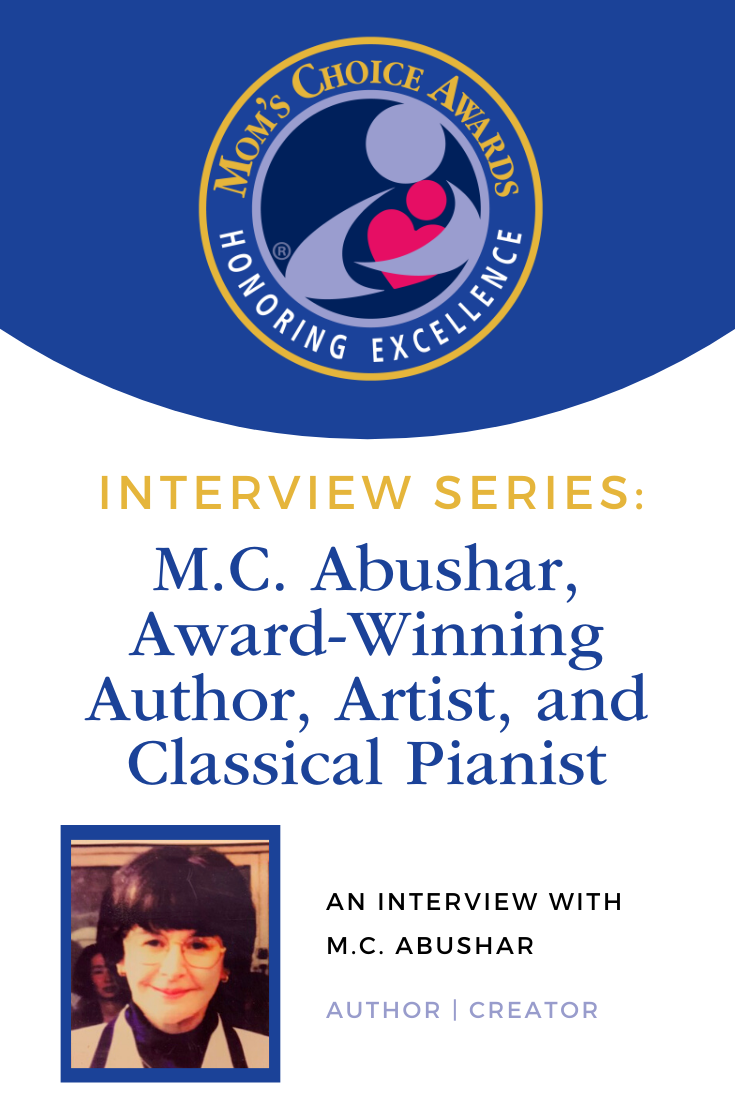 One Comment on “Interview with Mom’s Choice Award-Winner M.C. Abushar”