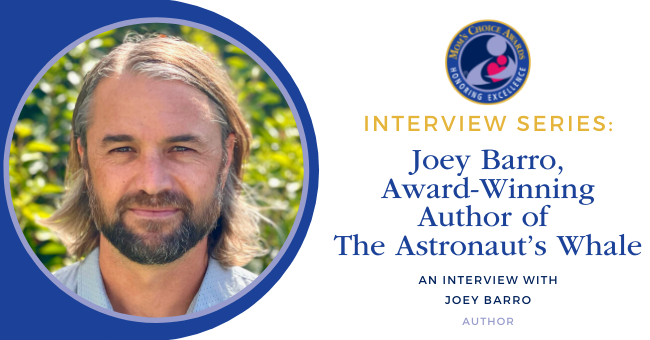 MCA: Hi Joey, thank you so much for joining us today. I’d first like to start off by congratulating you on your Mom’s Choice Award! The Astronaut’s Whale is such a cute story with a very unique premise, combining both ocean and space! What are some things you would like the readers to know about the author behind such a unique book?

Joey: I currently live in Southern California with my wife and two sons. My primary career is as a high school English teacher. In addition to teaching, I spend most of my time as a musician. I’ve been a musician for twenty years or so and I write and release songs as the Traditionist. Songwriting sometimes leaks over into poetry and children’s poems depending on the subject matter. Besides juggling these pursuits, I also love surfing and swimming. I love to surf as much as I can, and when the waves aren’t so good, I’ll swim.

MCA: Your teaching and music career in addition to your writing all sounds very rewarding! Was it your songwriting that led you to eventually become a children’s book author? 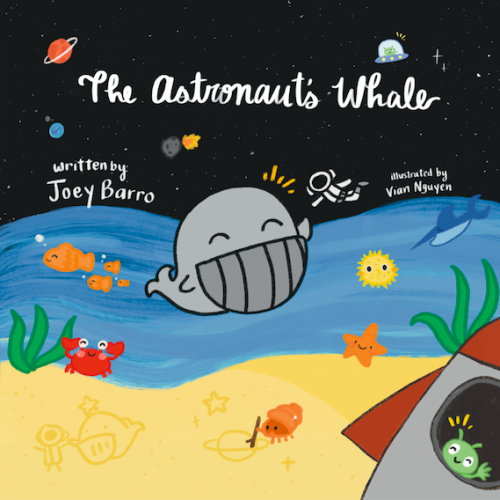 Cover Art for “The Astronaut’s Whale.”

Joey: Originally, I started writing because of music. I joined a band when I was younger and we needed songs, so I started writing songs. Since then, writing has taken on so many different forms. I still write songs, but I also write poetry, kid’s poems, and stories, and of course, I’m surrounded daily by teaching writing and literature at the high school level. I guess my inspiration evolved over time, from learning how to write songs and lyrics, to now, where I can’t imagine a world where I’m not writing songs or poems all the time. I’m not sure if I can name a specific inspiration; usually, ideas just happen when they want to.

MCA: What was your inspiration for writing The Astronaut’s Whale and can you tell us about the K-Pop viral connection of the poem that led to the book?

Joey: I originally wrote The Astronaut’s Whale around the time my sons were being born. I think some of that uncertainty and worry of becoming of new dad probably shows in the story with Vincent eventually returning home. Maybe I was worried that my kids will be gone someday; I think I still worry about that every now and then. On the other hand, it reflects my own life in many ways too. I’ve bounced around and had my fair share of adventure, but it always stays rooted in family and the ocean. I live close to the beach, and of course, the ocean has always been a huge presence in my life. So it seems only natural that these elements would come out in a fun kids’ poem.

The Astronaut’s Whale was the first kids’ poem I had written, and at first, I didn’t think much of it. I posted the poem up on my website where I feature all of my songs, other poems, a few short stories, etc. For a while it didn’t get any action, then one morning I woke up to see that the poem had 20 thousand views in one night. I was confused but also excited. After doing a bit of research to see why my poem had gone viral, I discovered that there was a fan theory out there in the K-Pop (Korean pop music) world that theorized The Astronaut’s Whale as the inspiration for the famous K-Pop group Exo’s music video for the song “Sing For You.” Since then, the story is consistently read on my website internationally. I get many visitors from all over the world, wonderful feedback about the story, requests for translations, and even a group in Mexico who are working on a theatrical adaptation of the story.

MCA: The Astronaut’s Whale is not only filled with wonderful rhymes but also tells a story through its beautiful illustrations. Can you tell us about the relationship with the illustrator, Vian Nguyen, and your roots together at Fountain Valley High School in Orange County?

Joey: Working with Vian was an excellent experience. She is probably the kindest, most honest person I have worked with, and her enthusiasm was unwavering from the beginning. Initially, Vian was a student in my wife’s biology class at Fountain Valley High School (my wife and I teach at the same school). My wife had seen Vian doodling animals and other designs in her notebook, and Vian had heard about my story. I think my wife must have mentioned the idea of putting some illustrations to the story, and the next thing I knew, Vian and I were off and running. It took a few years for us to really get it together because it was a first-time experience for both of us. Vian was juggling college and her own art, while I had my career, family, and music. We had our ups and downs, lost some files, and had to backtrack, but eventually, we stayed persistent and positive through it all to complete it. When Covid happened last year, it gave both Vian and myself some time to really string everything together and make the final push to get everything we did into print. It was a long process for us, but it definitely paid off in the end!

MCA: That’s such an interesting story of how you two met and began working with each other! Well, I can safely say that all that time and hard work definitely paid off and is apparent throughout The Astronaut’s Whale. What is the connection with the ocean, animals, children, and adventure that’s present within The Astronaut’s Whale? 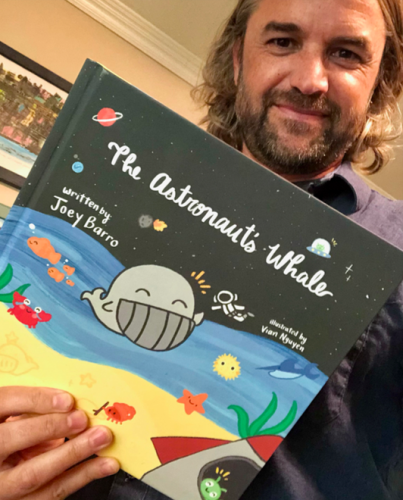 Joey Barro with his book, “The Astronaut’s Whale.”

Joey: There are several connections. First of all, I’ve always thought whales are some of the coolest animals on earth, and of course, astronauts are really cool too. I thought that there must be a kid’s story written about the two in combination because it seems like all kids love astronauts and whales. Of course, the connection with my wife and Vian in my wife’s biology class was also inspiring. But the concept of the deep blue sea and space seem like perfect settings for adventure because they are both so unknown, unexplored, and really left mostly to the imagination.

MCA: That’s a very good point, I never thought about the connection between oceans and space that way. What kind of response from readers have you received?

Joey: so far the response has been incredible. I think Vian’s cover is very warm and enticing. It seems to be working because people seem to be attracted to the book. The cover is magnetic. The feedback after reading it has also been extremely positive. People seem to be enjoying it, and more importantly, the kids are loving it! This entire process has been full of surprises, and I’m so grateful. I feel lucky that I can share this with others, and lucky that Vian and I were able to have a blast while we created it.

Joey: I think there are many lessons, but I think the primary lesson would be the importance and value of family. Both of the main characters in The Astronaut’s Whale want adventure; they seek it out and explore. But in the end, they both realize that family is what makes them who they are, and that is no small thing. Exploration and adventure are the counterweights, and are both very important; but, the value of family and friendship is what is most important, at least until the next adventure and the cycle repeats itself.

MCA: Thank you for sharing that with us, and thank you for a great interview, Joey. I hope to hear a lot more from you in the future!

You can learn more about Joey Barro and his award-winning book, The Astronaut’s Whale by visiting his MCA Shop pages. 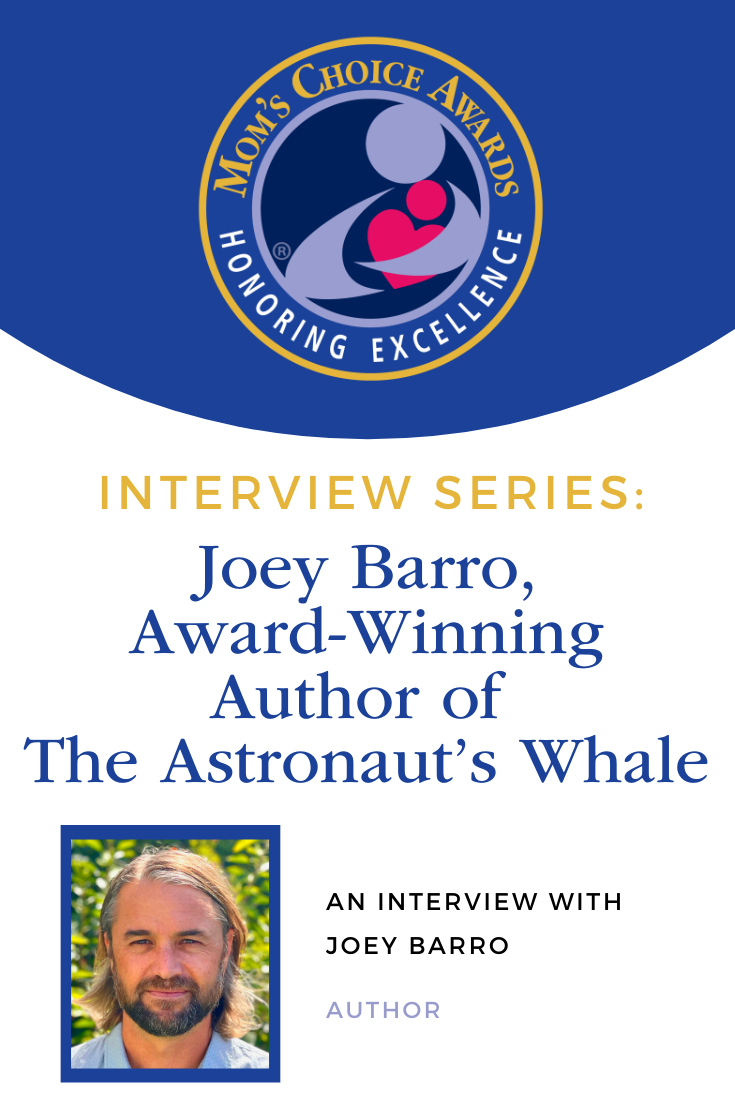