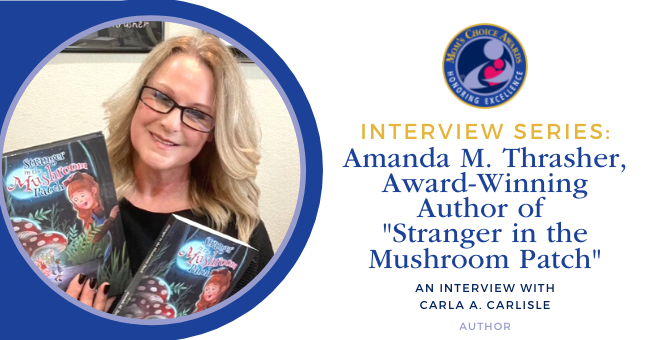 MCA: Hi Amanda, thank you so much for joining us today! Stranger in the Mushroom Patch is the second book in the Mischief series to win and your fifth book overall to win a Mom’s Choice Award, that is quite an accomplishment! I’d like to first start the interview by finding out a little bit about the talented author behind those books! 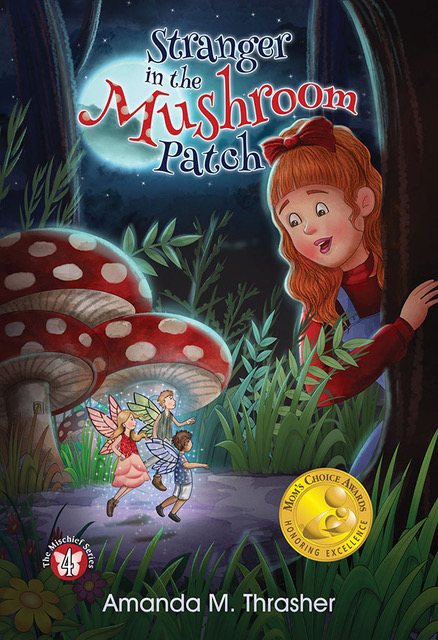 I founded and am the CEO of Progressive Rising Phoenix Press, an independent publishing company. I share my writing and publishing experience with others through school visits, book signings, trade conferences, and workshops for aspiring writers.

In addition, I was contracted to write a graphic novel for the Driving on the Right Side of the Road Program. The publication is part of the Driving on the Right Side of the Road (DRSR) program, developed by the Law-Related Education Department of the State Bar of Texas Law Focused Education, Inc., and the Texas Municipal Courts Education Center with funding from the Texas Court of Criminal Appeals and the Texas Department of Transportation. The program’s purpose is to offer a preventive educational program to encourage responsible decision-making when it comes to obeying traffic laws and following safe practices. The graphic novel, What If … A Story of Shattered Lives, was adapted into a reader’s theater for as few as five speakers or as many as twenty-six and remains part of the DRSR program.

My interests include hiking, bike riding, and long walks with my dog.

MCA: That is all very interesting, thank you so much for sharing! What did your journey to writing all of those award-winning books look like?

Amanda: Like most writers, writing has always been a part of my life, from writing poetry and short stories as a child to creative writing becoming my favorite class in school. I wrote several MS just for fun before being published and continue to write today. Words are fun, and creating stories that other people like is the most rewarding part of being an author.

The inspiration that turned my journey from writer to author was a commitment to write a story for my mom, who loved fairies, and happened to be ill. I wrote her Mischief in the Mushroom Patch. The book forever changed my writing course from dabbling in words to writing for a reason.

MCA: As we stated before, Stranger in the Mushroom Patch is the fourth book in “The Mischief Series.” Can you give us more details on what the series is about?

Amanda: The Mischief Series is a fairy adventure chapter book series for girls and boys. It’s purposely written with themes of kindness, friendship, respect, loving care, loyalty, and the innocence of childhood or fairlinghood woven into the pages of the books. The series is written for independent readers, second through fourth grade, but can be enjoyed as a bedtime story and read-aloud chapter by chapter.

MCA: What was the inspiration behind all of the books within “The Mischief Series.”

Amanda: The inspiration behind The Mischief Series was brought about by a commitment to write a fairy story for my mom. My mom, Irene Yvonne Mulroy, loved fairies and collected all things fairy. A particular fairy statue, sent to her as a gift from her sister from England, became the inspiration for my main character Lilly. I wrote my mom Mischief in the Mushroom Patch. She became ill but made me promise to finish it. Though she never saw it in print, I was able to read her seven of the fifteen chapters and tell her what I knew the ending would be; she loved it. My mom made me promise to finish the story and continue to write. I kept that promise. I am thrilled that other people enjoy the series as much as I believe she would have.

MCA: Tell us about the characters that can be found in each book in “The Mischief Series” 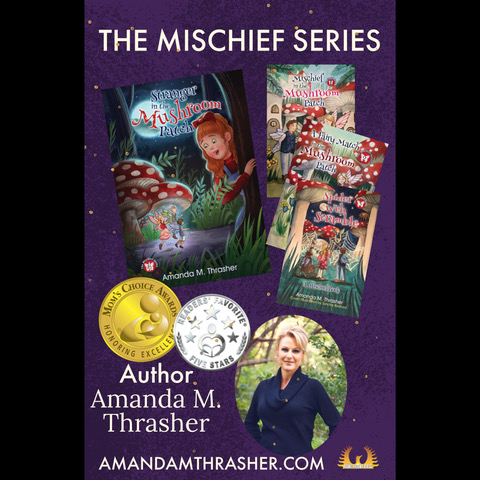 Amanda: The main characters of The Mischief Series are Lilly, Boris, and Jack. The supporting characters are Pearle, Rosie, Ivy, Broderick, and the Elders.

Lilly adores the color pink; everything she wears is pink. She’s helpful and inquisitive, but her desire to help others often comes across as slightly bossy. Her friends do not mind this; they are amused by it, especially since Lilly appears to be unaware of how she takes charge of every situation.

Boris is one of Lilly’s best friends. He’s clumsy and has trouble flying due to his balance, but he has a lovely disposition and is liked by everyone.

Jack is nearly always found with Boris; he’s also one of Lilly’s closest friends. Jack can fly fast, is mischievous in a playful way, and wants to be an explorer when he grows up. If there is trouble to be found, Boris and Jack are typically the first two fairlings that come to mind.

Pearle is a unique character inspired by a girl, Jeni, whom I had never met. Jeni’s mom purchased Mischief in the Mushroom Patch, and after reaching out to me, she said, “My daughter would have loved this book.” Her daughter was no longer with her, and she went on to ask if I would create a character that had a disability because Jeni always said, “Where are the books for me.”

I thought about her email for a while before I answered. When I responded to her, I asked if I could have a moment to think about her request. I wanted to be sure to honor and respect my mom, who I had written the book for, and to respect her daughter, whom I never knew. After a while, I sent her a sample chapter introducing beautiful little Pearle. Beverly, Jeni’s mom, loved it, and from that chapter on, Pearle was introduced as part of The Mischief Series.

Pearle can not walk, but she can fly with ease. She is loved by all and never feels sorry for herself. She can often be found giving the other fairies a ride on her chair, which the Elders refer to as her chariot, and playing a game called ‘Spin a fairling green.’

Rosie and Ivy are friends.

Broderick is a spider that knits fabulous matching hats, scarves, and mittens for Lilly and the others. He loves to bake and watches over the fairlings when they play in his webs.

Elders: Mademoiselle Francesca, Madame Louise, Monsieur Pierre, and Monsieur Claude are the principal elders that supervise and teach the fairlings.

MCA: Is Stranger in the Mushroom Patch meant to be read as part of “The Mischief Series” or as a standalone book?

Amanda: Stranger in the Mushroom Patch and the other Mischief books were written to be enjoyed as stand-alone books and part of a series. Though Mischief in the Mushroom Patch is the first installment of the series, if books 2, 3, or 4 were read first, the reader could easily follow along and enjoy each book, fully understanding what was going on in each storyline.

Amanda: I’ve been thrilled with the response that I’ve received. People that read the books to their kids, classroom, or kids that have read the books themselves love the adventures of Lilly, Boris, and Jack. I’ve had some lovely emails and interactions with readers that assure me the characters and adventures are a pleasant change from many books we see today for young readers. The Mischief Series was purposely written to be timeless, whimsical, and a lovely fantasy adventure with likable characters everyone can enjoy. I’ve been told that the gentle life lessons entwined throughout the pages are a lovely touch. I think the beauty of this series is the innocence of the characters, theme, and storyline. I hope my readers continue to love Lilly, Boris, and Jack.

MCA: That must be incredibly rewarding for you! Thank you for a wonderful interview and for taking the time to chat with us! We’re

You can learn more about Amanda M. Thrasher and her award-winning book, Stranger in the Mushroom Patch by visiting their MCA Shop pages. 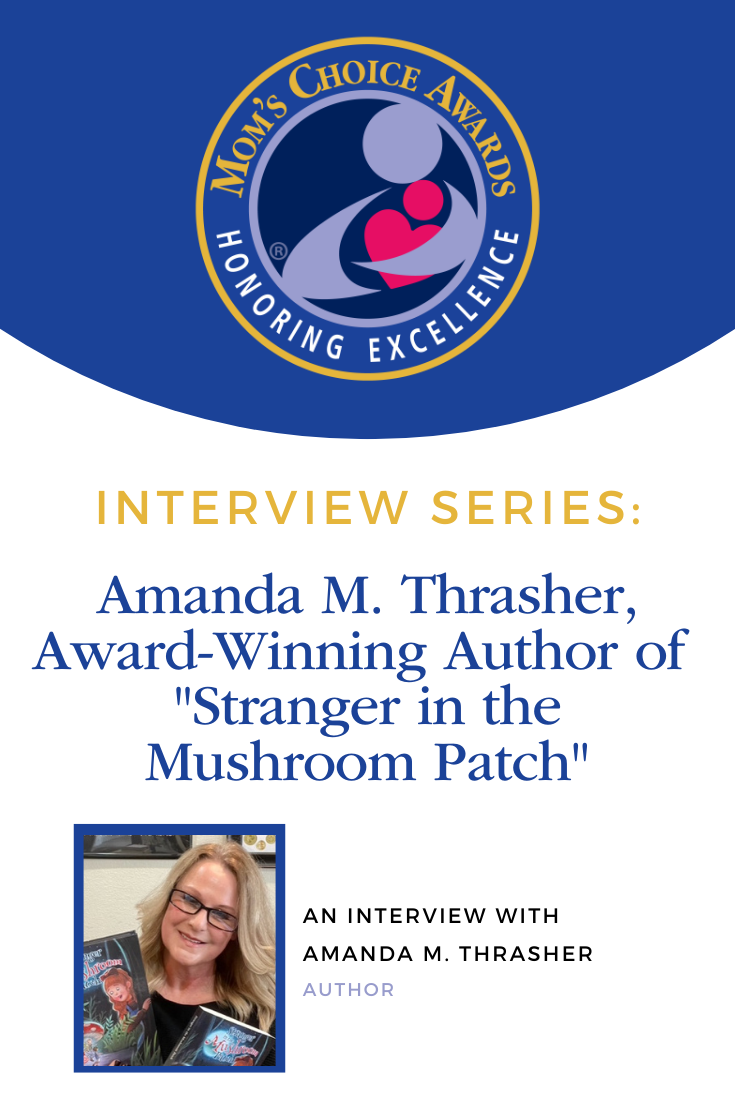