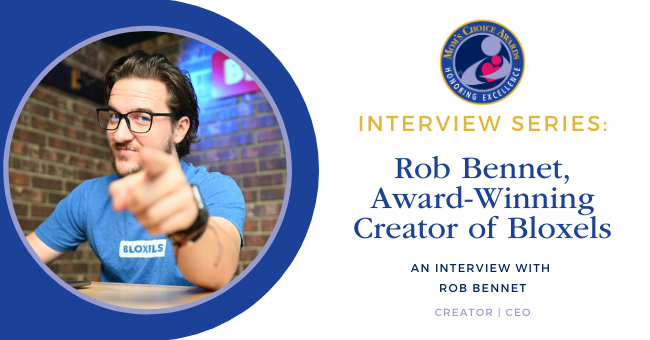 Hello, Mom’s Choice readers! We hope this finds you well- thank you for joining us for another installment of our interview series. For this installment, we had the pleasure of speaking with Rob Bennet, creator of the MCA award-winning product, Bloxels! Bloxels is a hands-on platform for kids to design and build their own video games. Keep reading to find out more about Bloxels and its creator, Rob Bennet!

MCA: Hi Rob! Congratulations on winning your MCA! Bloxels is such a fun product that allows a ton of room for creativity while increasing drive, focus, and confidence in children. Can we start the interviewing by finding out more about the man behind Bloxels? Tell us about yourself! 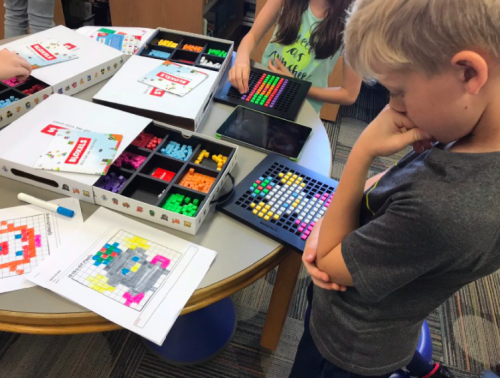 Rob: My name is Rob. I spent my youth as a musician, playing shows in rock bands and building websites for my band friends. I have been obsessed with computers and technology my entire life but also very heavily influenced by art/music. In my late teens, I was playing shows weekly in between school and other commitments. I eventually went to the University of Tennessee where I studied Psychology and Physics. Once I completed college I decided to take a job with Macy’s Corporate Marketing in New York City and quickly realized I was not particularly interested in working in the corporate atmosphere. I had a lot of ideas and projects and bounced around a bit in my early 20s looking for the right fit. In my late 20s, I met my wife, started my own design and development company, and had my first son. It was soon after that when I partnered with my co-founders and we formed Pixel Press. My wife and I now have 2 sons and live in the mountains of North Carolina where we enjoy hiking and sustainable organic farming in our spare time.

MCA: That’s quite a contrast to the hustle and bustle of New York City! The mountains of North Carolina are truly picturesque. Can you tell us more about the formation of your company, Pixel Press?

Rob: In the spring of 2013, Robin Rath approached me with the idea to draw your own video game on graph paper and turn it to life with a smartphone or tablet. He had the idea during the holidays while talking with his childhood friend, Josh Stevens about how they used to draw video games as kids and how technology might finally be in a place to see something like this come to life. Robin approached me to ask how realistic the idea was from a tech perspective. I was immediately excited about the idea and along with my then business partner, Daniel Wiseman, I teamed up with Robin and Josh to launch a Kickstarter around the idea. After a successfully funded Kickstarter in June of 2013, the 4 of us formed Pixel Press with a mission to build a platform for kids to create their own video games physically (through drawing) and then realize them digitally.

MCA: Well I think it’s safe to say you’ve accomplished that mission with Pixel Press. Was that mission what drove you to create Bloxels? What were the needs that you were trying to fill when you created Bloxels?

Rob: We wanted to make it possible for anyone to build a video game, without having to be an expert at coding. There are a lot of tools and apps out there that are about teaching kids how to code already. But in a lot of cases, what you’re doing with those is putting a lot of time into the code part and it can be underwhelming on the game part. With Bloxels, even young kids can build a character and bring it to life relatively quickly- giving them the confidence to go further.

With Bloxels, we were also building on the previous game builder we made, Floors. With Floors, kids could draw their own games on graph paper and bring them to life in the app. Bloxels improves on that by using tangible blocks, each with a built-in behavior. For example, green acts like the ground, and red acts like lava. There are eight block types, and from there, kids can make it look and play like whatever they can imagine.

MCA: Bloxels definitely fuels the imagination and creativity! Can you tell us about some of Bloxels‘ unique features?

Rob: We started with our belief that everyone can build a game- and then followed what kids (and teachers) were doing with Bloxels to figure out the right features. Through that, and talking with experts, we continue to learn a lot.

There’s no doubt that video games are pervasive in our lives and culture, and a decade of educational research suggests that game-based learning is one of the tools that we can use to reimagine learning. But when people think about “educational games” they might be thinking about embedding “lessons” in games with small prizes and rewards. Examples of this “behaviorist” approach include skill-and-drill quizzes or digital flashcards.

Bloxels is not that kind of game. Bloxels embraces the constructivist approach laid out by Jean Piaget. Constructionists believe that the best learning experiences, for most people, come when they are actively engaged in designing and creating objects that are meaningful to them and others around them.

With Bloxels, we take to heart the constructivist approach. Our goal is to provide learners with sufficiently expressive, but fundamental and simple, construction tools so that learners can interact with both video game design and play in a variety of personally meaningful ways.

MCA: Why did you decide to make the switch from working with a big toy company to focusing on education? 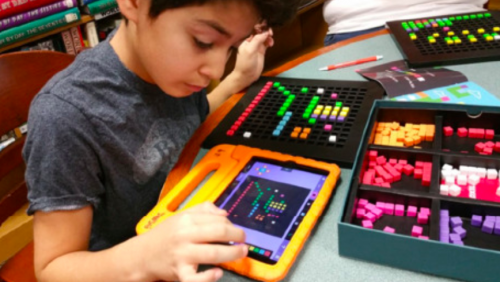 A closer look at Bloxels.

Rob: We were very fortunate to have formed a relationship with one of the largest toy companies in the world when we launched Bloxels. They understood how to get an idea (Bloxels) in front of millions of people, and we understood all the things that went into that idea- software, computer vision. But part of the toy industry is, by its own nature, about what’s in the next box. What are the licensed versions- we did a Star Wars version of Bloxels, which was a lot of fun to work on.

MCA: A Star Wars version of Bloxels, how fun and creative! What are some of the amazing things you’ve seen kids build with Bloxels?

Rob: There is such a variety to the games kids make. We feature new games in the Arcade every week and play through them on YouTube when we feature them. One of our favorite things is when someone really surprises you with a design, or something you didn’t know was possible. For example, blue blocks behave like liquid- which you can move or “swim” through. Kids use this for all sorts of things, like ladders. We didn’t expect that.

They also tell some very detailed and “epic” stories. We review the text of all games before they’re published, and we’ve seen short novels in some cases! Some of them are fantasy stories from other worlds, but others are much more personal. A number of kids have created stories and games about what it’s like for them through COVID, for instance.

Lastly, they also make games for school projects. They use white storyblocks to narrate their research on a topic. The subjects are very diverse- historical events and figures, but also ecosystems, urban planning, and even the UN’s Sustainable Development Goals have all had multiple Bloxels games made about them.

MCA: What is next for Bloxels?

Rob: One of the things that we think would be cool would be more ways to get things into and out of Bloxels. New ways to capture and create, and more ways to export it and share it. We’re also going to continue to make improvements to the Arcade so that kids can build their own fan base for their games and follow their favorite creators.

Beyond that, our plan is to continue to listen to kids and teachers on what they want to do, and to give them novel ways to do it!

MCA: That sounds like a great plan to us! Thank you for giving this interview, we’re sure we will be seeing a lot more MCAs in your future!

You can learn more about Rob Bennet, and his award-winning product, Bloxels, by visiting her MCA Shop pages. 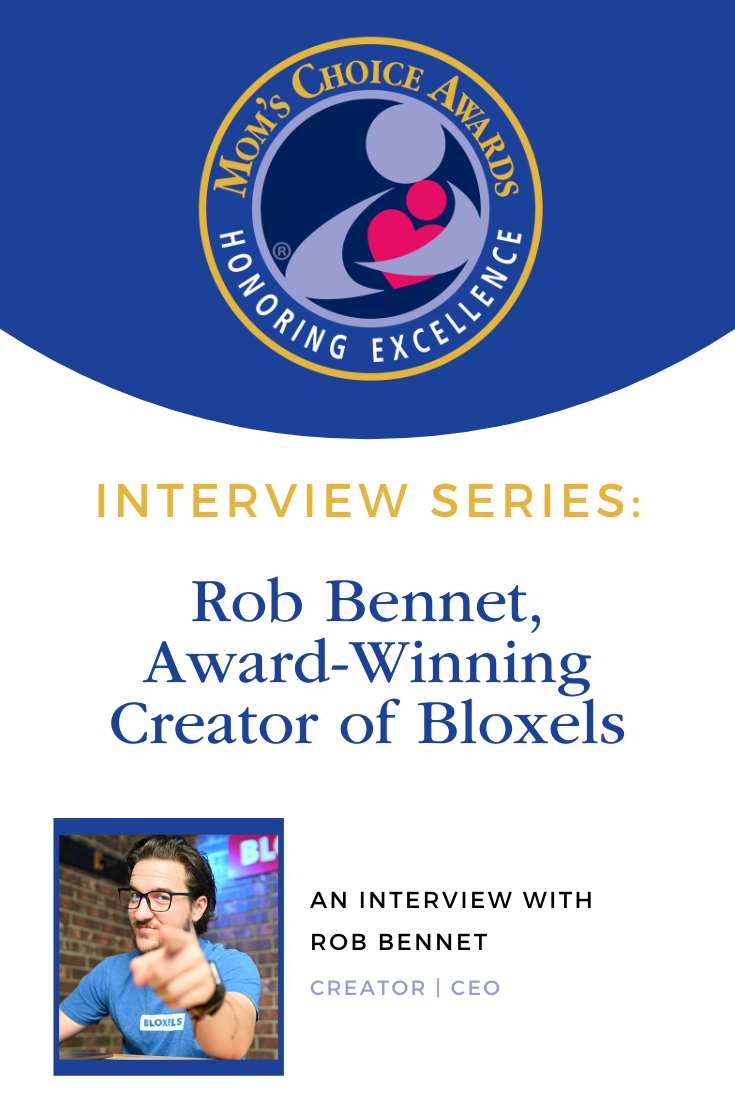