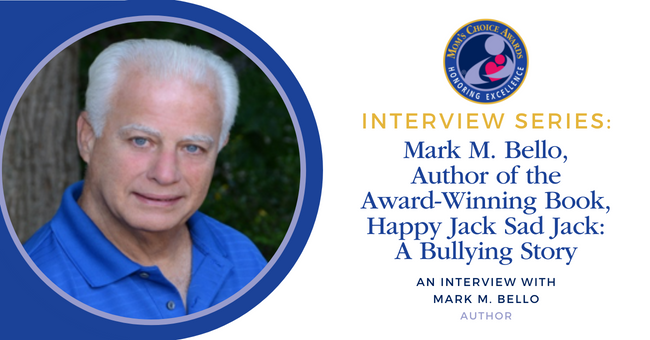 Hello, Mom’s Choice readers, welcome back to another honoree interview! For this interview, we had the chance to catch up with Mark M. Bello, author of the Mom’s Choice Award-winning book, Happy Jack Sad Jack: A Bullying Story! Happy Jack Sad Jack: A Bullying Story is a must-read for all children and one your child will never forget. As parents, we want certain things for our kids. Mainly, we want them to be happy. Can today’s kids celebrate their differences, or are they doomed to fight over them like generations before? Jack’s school community learns an important lesson as attorney/author Mark M. Bello presents Jack’s compelling story in rhyme, beautifully and dramatically illustrated by Melinda Falgoust. Keep reading to find out more about Mark M. Bello and his award-winning book, Happy Jack Sad Jack: A Bullying Story!

MCA: Hi Jack, thank you so much for joining us today, and a big congratulations on your Mom’s Choice Award! Children’s books on bullying are so important because they can help kids understand it as a serious issue and develop healthier relationships with their peers. Can we start the interview by finding out a little bit about the author behind such a special book? 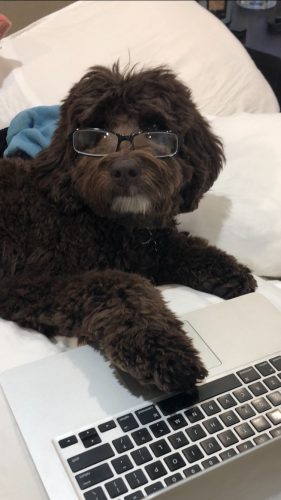 Mark: My name is Mark M. Bello. I am the author of 8 Zachary Blake social justice legal thrillers and two social justice/safety children’s picture books. I also wrote a Jewish recipe cookbook featuring the fictional family of my legal thriller protagonist, but actually pulled from real members of my own family. I practiced law for 45 years and became an author after I retired. I’ve been married to my beautiful wife Tobye for almost 47 years. We have four married adult children and nine gorgeous, edible grandchildren. I want my grandchildren to grow up in a world where we don’t fight over cultural, religious, gender, or racial difference.

MCA: Wow, you have been quite busy with your writing since your retirement from practicing law! Can you tell us what made you decide to become an author after such a long career as an attorney?

Mark: When I was a young lawyer, I handled a clergy sexual abuse case against the Catholic Church. The church behaved despicably, covered up the crime, hid evidence, transferred priests, and moved witnesses. When the case was over, I promised myself I would write a book about it someday. I never thought ‘someday” would be 40 years later, but I finally wrote the book, Betrayal of Faith, after I retired. I thought I was done. I fulfilled my ‘bucket list’ item. But the 2016 election came along and I decided to write a fictional account of that story. After that, I realized I could write compelling novels about current events, and here I am, 10 books later.

MCA: That’s wonderful, it is so fulfilling when we can pursue different career passions in life. What was your inspiration for writing Happy Jack Sad Jack: A Bullying Story?

Mark: My inspiration was a bullying event that happened to me—I was bullied because I was Jewish—and the racial divide that currently exists in our country. As I said earlier, I would love for my grandchildren to grow up in a country where we celebrate our differences rather than fight over them.

MCA: Can you tell us about some of the discussions of bullying and other social justice issues that can be found within Happy Jack Sad Jack: A Bullying Story? 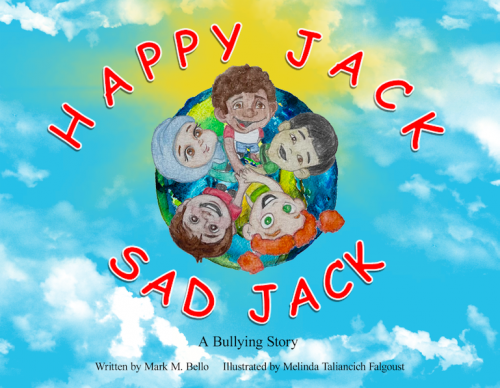 Mark: Jack is a 5-year-old biracial child. He has always been a happy boy. On the first day of kindergarten, he discovers, for the first time, that he is different than the other children. At recess, one child pushes Jack down in the playground, just because he’s black. Happy Jack becomes Sad Jack and refuses to tell on the boy. He doesn’t want to be a tattle-tale. He grows sadder and sadder over time, and, finally, a meeting with the principal reveals the truth. The principal not only disciplines the child (and his bigoted parents—the apple does not fall too far from the tree), he calls an assembly and lets the whole school know that America is a multicultural melting pot:

“People are different in color, shape, size,
Ears, noses, mouths, and different shaped eyes.
Different races and genders—more too.
We’re Christians, Buddhist, Muslims and Jews.
But the one thing in common we all have in this place,
We are all valued members of this human race.”

MCA: The fact that America is a multicultural melting pot is what makes it such an amazing country, thank you for sharing that message with us! Why is it so important to introduce topics of social justice and bullying to children as young as preschool and kindergarten?

Mark: Because kids are getting these messages too late in life. By the time schools put bullying or distracted driving (the topic of my next children’s book) in the school curriculum, it is often too late. I think young kids have the ability to understand and appreciate these messages. Bad habits or behaviors are taught or acquired; kids are not born with them.

Mark: I’ve had very positive response from readers and critics. I would like to find a way to reach more readers, perhaps through partnerships with organizations like yours, schools, or anti-bullying organizations.

Mark: The message contained in the passage quoted in my answer to your previous question number 4. We are all in this together. Our common humanity should be celebrated rather than fighting over cultural, religious, sex, and color differences. We are, indeed, all valued members of this human race. As Rodney King said, so many years ago, “Can’t we all get along?”

MCA: What is next for you in your writing career? 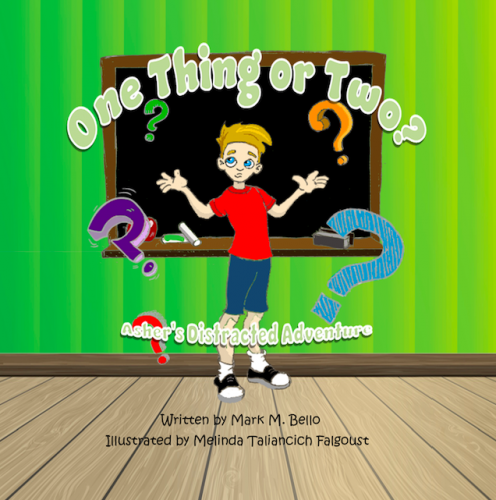 “One Thing or Two? Asher’s Distracted Adventure” is a story in rhyme about a minor traffic accident caused by a distracted driver. A young family on its way to the park is hit by a teenager who is texting and driving. Following the accident, the kids go to see “Dr. Vicki” and everything checks out fine.

As with bullying and “Happy Jack Sad Jack”, I believe that children are getting information about certain dangers too late in life. In the case of small children, they are given phones and tablets and become addicted to them long before drivers’ training. By that time, they are completely device dependent and likely to use them while driving. By introducing the concept at a young age, calling attention to the potential dangers of driving while using the phone, I hope children will tell mom & dad to put down their phones while driving. Hopefully, they will remember reading “Asher” when it comes time for them to become drivers. Both issues (bullying & distracted driving) should be part of any grade school curriculum and I plan to make myself available to get these important messages out to elementary-aged kids.

MCA: That sounds like another very important book to share with little readers, we cannot wait to read it!

You can learn more about Mark M. Bello and his award-winning book, Happy Jack Sad Jack: A Bullying Story, by visiting his MCA Shop pages. 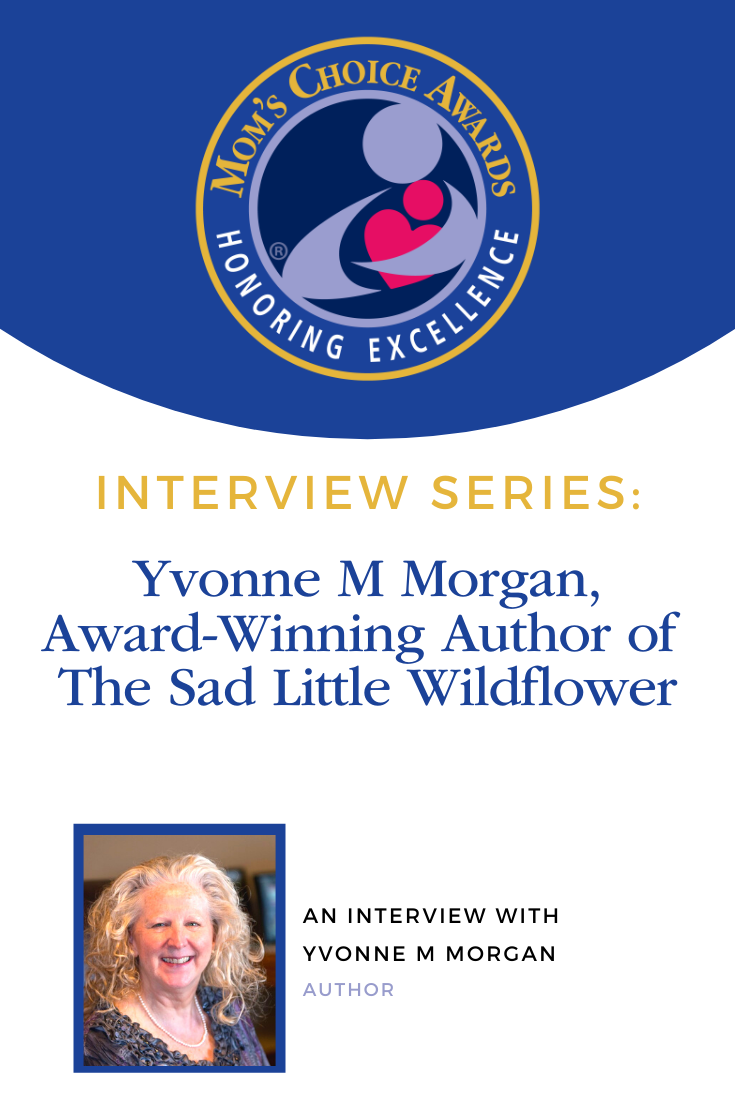