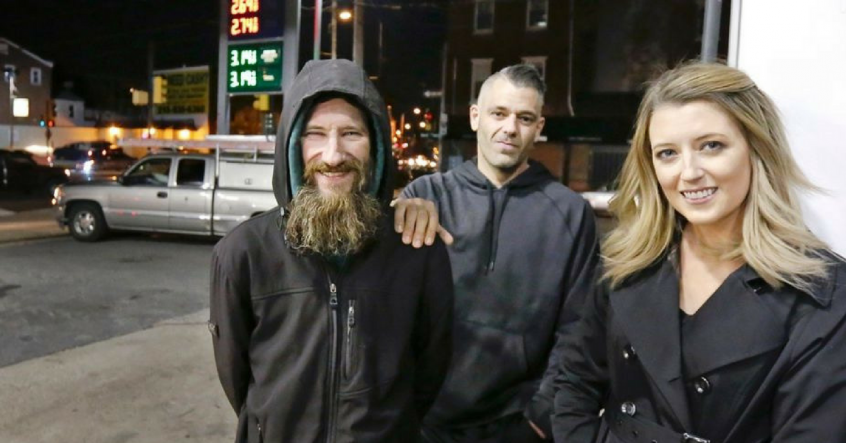 I’m sure it’s a feeling most of us are familiar with: driving down the road and noticing the gas tank is getting low. It’s night time and you think to yourself, it would be really bad to run out of gas right here, right now. Please, please please…

Kate McClure, a New Jersey woman, was having the exact same thoughts as she drove down I-95 in Philadelphia; and unfortunately, she did run out of gas. In the dead of night. On the interstate. Alone.

Scared and stranded, she wasn’t quite sure what to do until a kindly stranger saw her standing outside of her car. He instructed her to get back inside, lock her doors, and wait for him to get back. He was going to walk to the closest gas station for a gas can to help her out.

Johnny Bobbitt Jr. is a homeless veteran living in Philadelphia. Not only was he looking out for Kate’s well-being as a vulnerable female in the city, he gave his last $20 to ensure her safe return home. Although she didn’t have any money on her at the time, Kate promised Bobbitt that she would return- and she did, several times, with her boyfriend, to give him clothes, food, and money.

Each and every time they visited, both McClure and her boyfriend were stricken with how much they wanted to really help this man. There was something special about him. “I wish that I could do more for this selfless man, who went out of his way just to help me that day,” McClure wrote. “He is such a great guy, and talking to him each time I see him makes me want to help him more and more.”

Utilizing some internet espionage, they found out more about their new friend. His Facebook paged showed that he was formerly an ammunition technician in the U.S. Marine Corps, and was a firefighter and a paramedic before moving to Philadelphia for a job that fell through, leaving him without an income and eventually homeless.

And boy, did they ever. To date, the fundraiser has over $385,000 in donations- and climbing! McClure has set up long term housing, a cell phone, transportation, and meetings with lawyers and financial planners to start. Bobbitt is overwhelmed with the generosity of strangers; Kate mentioned to various news outlets that he asked her to shut down the page at one point, because he was worried about receiving too much money. But in the end, Kate’s resolve won, and Bobbitt promises to give back much of what he’s receiving.

Johnny holding the article in the paper today about him and the people willing to help!! https://t.co/jLSNrNuYcy pic.twitter.com/MryoaUrGmD

“This money was given to help me. Why not help other people in similar situations or people that are actively helping other people in different situations?” he said. “Everybody out there is facing some kind of struggle, so if I can touch their life, the way mine was touched, [it’d be] an amazing feeling,” Bobbitt said. “I want to feel the feeling on the opposite end.”

We believe you, Johnny, because when you had just $20 to your name, you gave it all to a young woman who was in need.

I know I will be thinking about this story, and so many others like it, as we walk into the holiday season. If not caring for others and giving out of our own abundance, what is this season all about? Thank you, Johnny and Kate, for giving us hope and cheer to end 2017.