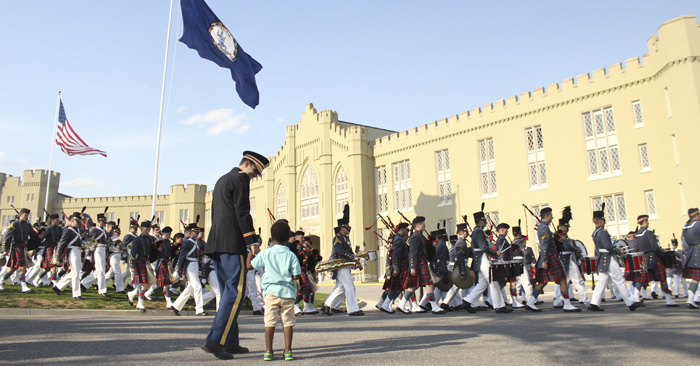 I was in tenth grade when I looked my High School guidance counselor right in the eye and said firmly, “I’m going to college.” She looked a bit surprised, fumbled for a moment, and said, “Well okay then…” as she shifted gears in the conversation.

We were in a meeting with her and my parents to discuss my future in school. There were two tracks you could take at my High School – the one leading to what was called an “advanced diploma” (required for college admittance) and one called the “standard diploma” (the track that led straight into a career after High School.) There is absolutely nothing wrong with either of these diplomas, but my guidance counselor was pushing me to the standard diploma because she didn’t think I was capable of earning an advanced diploma or going to college. That irked me.

All throughout my childhood my parents pushed me to try my very best and go for my dreams. They gave me and my siblings every opportunity they could to be successful and flung the door wide open to the possibilities. We went to the zoo and the beach and hiked mountains to incredible observatories, exploring this world top to to bottom. We went to the aquarium where my mom worked for a time and went to meet astronaut Sally Ride when she came to town. (She signed her book to us, “Reach for the stars!”) My parents took me to violin lessons, dance recitals, swim meets, and sat court side at every basketball game. We toured the civil war battle fields and the Smithsonian. Our minds filled with the wide range of opportunity in this world and I knew there was a place just for me to fill.

School wasn’t always easy for me, though. I struggled to make decent grades and found myself increasingly frustrated all the way through Middle School and into early High School. So one day we did a little testing and discovered I had a small learning difference. My confidence took quite a hit (differences aren’t really acceptable to other teens.) In tenth grade I started spending an hour a day with a teacher who helped me figure out how I learned best, and how to utilize that learning style in the regular classroom setting. She told me I was smart and had potential to do something great. She believed in me and I believed her.

I finished High School strong and graduated with my bachelor’s degree in three years. And everything in me wanted to send a photo of my college diploma to that guidance counselor… I refrained.

I have two beautiful and amazing children of my own now. Now my role is to be the person who believes in them and makes sure they know that this world is full of possibility and opportunity and those things aren’t just for other people… it’s for them too! Now it’s my turn to take them to the zoo and the beach and the woods and to gaze at the stars and talk about space. It’s my turn to read them books about amazing people throughout history and explain that they have their own role in history to fill. I get to hold the door open and stand next to them and cheer at the top of my lungs while they try new things and figure out what they love and where their passions lay.

It starts now, even in preschool and Kindergarten. We have to fight for our children and their right to be successful in school and in life. We have to remember that it’s our job to be sure they aren’t slipping through the cracks. We get to step in when things aren’t right and say to systems and people who might hold them back or bring them down, “Nope. Not on my watch. Do better.”

Every child needs to hear they are important. Every child needs to be given the opportunity to shine. When things get hard we need to cheer them on and encourage them. When they fail (and they will, because we all do) we need to offer a safe place to land and sort it out before we make them get back on the horse. And they need to hear the stories of people like Albert Einstein (who was told as a child he’d never amount to much but whose mother refused to believe that.) Because anyone who underestimates any child is wrong.

We get to be our children’s greatest advocate. Because what I really wish that guidance counselor had done in that meeting was ask and listen more than she talked. I wish she had looked me in the eye and said, “Lauren, what are your dreams and goals for the future? Tell me what you hope for and I’ll work along side you to show the path to get there.” Thankfully I had parents and teachers who did just that.

And now that’s what I’ll do with my children.

Like when others are tempted to limit my son because he’s autistic, but I know he is kind and brave and compassionate and creative. He has a gift for photography and loves to build. His imagination runs wild with possibility.

Or when people said my daughter wouldn’t walk or play an instrument or soccer because of her amniotic band syndrome, but I cheered the loudest when she started walking the week of her first birthday and she’s one of the most agile, athletic, and coordinated kids on the playground. She is funny, kind, intuitive, and spunky.

My husband and I will stand in the gap of what other people might think they can achieve and what they actually can. Because we believe in them. We’ll simply hold up the mirror and give them the road map… then run beside them as long as they need us.