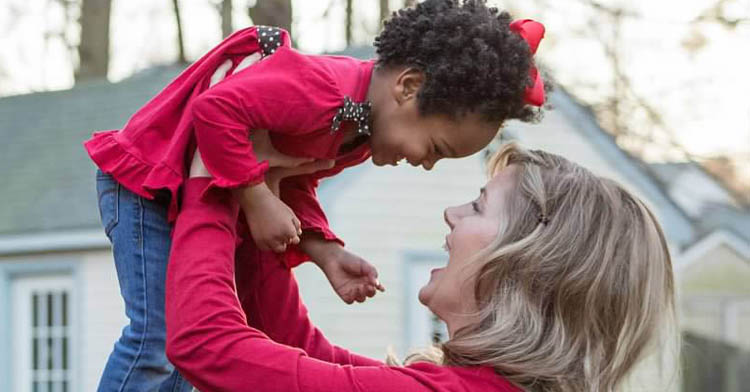 The other night I was cooking dinner while music played through iTunes on my computer. My five-year-old son played a game at the kitchen table and my almost four-year-old daughter stood in front of the living room mirror putting on her 48th layer of lip gloss. I heard the simmering on the stove and reached over to put the lid on the pain when my daughter came skipping around the corner to show me her shiny lips. When she heard the music she smiled and twirled once before asking, “Mommy will you dance with me?”

I looked down to see her arms reaching up to me and had a quick flashback to her as a one-year-old doing the same thing… reaching her little arms, “up! up!” My heart beat a little quicker and I bent over to lift her up. She wrapped her arms around my neck and laid her head on my shoulder as I swayed and slowly twirled to the music. I hum into her ear and sometimes sing along with the words.

It was one of those perfect moments that come along every so often. The evening was unusually warm for April so the kitchen windows were open with the curtains fluttering in the breeze. My son watched from the table, happy with his game and the peace that momentarily flooded our home and my heart. And then a new song began and as we swayed together I sang along to the chorus with Meghan Trainor and John Legend,

“So I’m gonna love you

When we’ll run out of time”

And suddenly my heart began to ache and the flashback of my children reaching up to me as babies turned into a flash forward. I pictured my daughter putting on her makeup in the mirror for her wedding and my son as a grown man who wasn’t waiting at my kitchen table for dinner anymore. My throat tightened as those words rang through my kitchen and I held my daughter a little tighter and my eyes got a little blurry as I looked over at my little boy playing happily.

When we become parents we give our whole hearts and lives to people we are going to lose. These little people who hold every inch of our hearts are going to grow up and move out and live their own lives. One day they won’t need us anymore. One day they’ll be cooking their own dinners and swaying with their own children and the thought, for just that brief moment, was a little unbearable. Because one day we will say goodbye, as they go off to college or move out when they start their career or when they get married. One day they’ll leave and I know just about exactly when I’ll run out of time: approximately eighteen years after they came into my home.

As we swayed in the kitchen I told myself I’d do what the song said. I would love them every day like I would lose them, because one day I will. So I’ll sing an extra song tonight and read just one more story than usual. I’ll spend a few more minutes playing trains and listening to a silly story from school. I’ll let bath time go on a little longer and go out for ice cream after school. I’ll hold them as long as they’ll let me and steal just a few more kisses. And maybe I can drag this out just a little bit longer…

Because one day this will be a flashback as I stand over my stove making dinner with my husband sitting at the table and a song will come on. And instead of little arms reaching up to dance with me I’ll look at my phone and maybe send a phone call to have a little chat and “remember when…”

So, little ones who call me Mommy… I’m going to love you because one day I’ll lose you and I’m going to hold you longer because one day we’ll say goodbye and you’ll launch out into the big wide world. And when that happens my arms will always be waiting and my kitchen table will always have an open space and my heart will hold you forever. But for now, let’s just sway in the kitchen for one more song… 10 Comments on “Because One Day We’ll Say Goodbye”