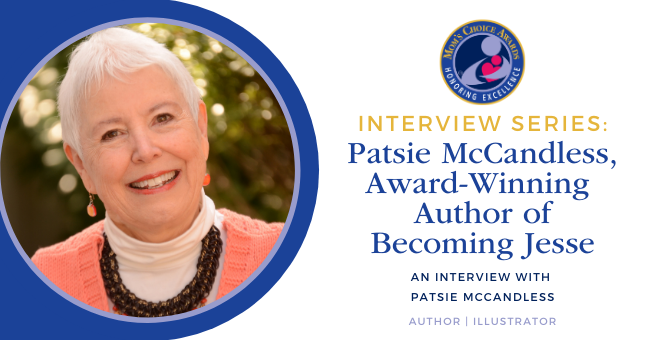 Hello, Mom’s Choice readers! Welcome and thank you for joining us for another part of our interview series. For this interview, we had the pleasure of speaking with Patsie McCandless, author of the Mom’s Choice Award-winning book, Becoming Jesse! Becoming Jesse is an inspiring story that’s filled with magic and wonder. This story is for readers of all ages and teaches important lessons about how to deal with some of life’s crucial problems such as attitudes and adversity. Keep reading to hear more about Patsie and her award-winning story!

MCA: Hi Patsie, thank you for joining us today! I’d first like to congratulate you on your Mom’s Choice Award! As Suzanne Rostan said when reviewing this book, “Sometimes one comes across a book that truly uplifts our spirits. Becoming Jesse is such a work.” Becoming Jesse really is one of those books where the character just leaps off the page and truly makes the reader feel as though they have entered into the world of Jesse. Can we start the interview by finding out a little bit about the author behind such a magnanimous book? 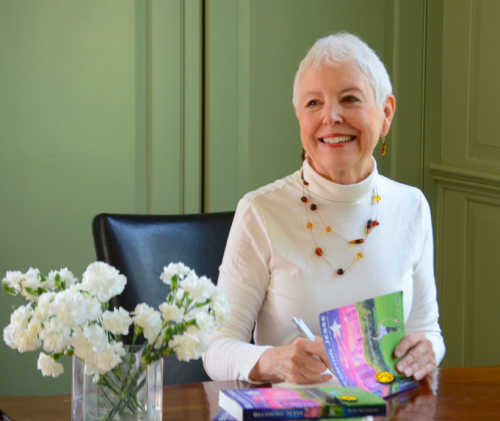 Patsie: I was raised on an island in New England and am a woman of multifaceted talents. After graduating from Rosemont College (PA), I returned to her island, married, raised two children, earned my Masters from URI, and was a primary school teacher for thirty years. Upon retiring, My husband and I moved to Florida and became active with the Museum of Fine Arts, The Florida Orchestra, and the Saint Petersburg Opera Company.

I also delivered a TEDx Talk on “Saving the Magic of Childhood,” and keep a weekly Blog: Light Lessons with Patsie McCandless.

I began writing when I took a workshop with Madeleine L’Engle – in a Trappist Monastery on the Hudson River in the middle of a snowstorm. I have not stopped writing since. In addition to Becoming Jesse – Celebrating the Everyday Magic of Childhood – I am writing a sequel: Becoming Jesse –The Quest. I am also working on a series of Lullaby books, highlighting my own musical compositions (flute) and my artwork.

As an award-winning watercolorist and paper artist, my PaperSolo artwork distinguishes the cover of my book: Becoming Jesse, which won the Book Cover Image Award in Los Angeles (Zamiz Press).

My unique art has been exhibited in galleries and museums in the U.S. and Mexico. My PaperSolo Opera series is in the permanent art collection of the Saint Petersburg Opera Company, and my PaperSolo of a musical St. Petersburg cityscape was presented as a gift to the Maestro of the Cuban Symphony. I’ve also been invited to exhibit in the annual miniature art shows in Florida and Washington, D.C. where I continue to win awards.

I also showed my PaperSolos in the Museum of Fine Arts, St. Petersburg, and they hosted my book launch and signing for Becoming Jesse – Celebrating the Everyday Magic of Childhood.

I continue to create as I enjoy the magic of childhood with my Baby Grands – my grandchildren. My husband and I now live near them on the Main Line near Philadelphia.

MCA: I love that nickname, Baby Grands, it is so cute! Becoming Jesse is filled with beautiful illustrations and imagery. Can you tell us a little bit about how you incorporated design elements of the story into your illustrations and icons?

Patsie: LIGHT is a prime symbol throughout Jesse’s story. He is often told – and he remembers to, “Keep your Light On!” The star kite on the cover is the symbol of LIGHT – and Jesse is tethered – connected – as brightly as the star itself.

Luminaries like Einstein, Stephen Hawking – or most clearly, Carl Sagan told us over and over that

You are the stuff of stars.

Truly. Earthlings and Stars share the same atoms: calcium – nitrogen – iron – carbon.
YOU and the STARS. As I wrote in Becoming Jesse,

TRIQUETRA – The Trinity Knot represents the eternal, weaving of the universe within three interlaced arcs, entwined with the unending circle. No beginning. No end. Eternal. Connected. Like the one, single thread that depicts the twists and turns within the design.
As Dearie tells Jesse, “Three is a magical number. Like the Triquetra, it embodies eternal elements that are connected – that go together. Like air, water, wind. Or sun, moon and stars.” She tickled his nose, “Like you, Jesse! Joy and laughter… and love.”) 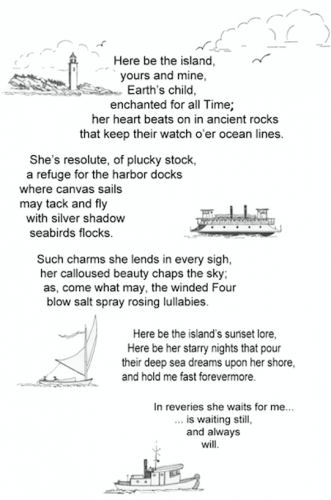 ISLAND POEM:
– each of my pen-and-ink images subtly reflects the message of Light and Connection on our life journey:

FERRY – symbolizes the transitions in life – the crossing over; also, a ferry takes time: slow down – notice the moments – enjoy the ride.

SAILBOAT – spurs thoughts of breaking out, exploring – over the horizon… over your own vision, on your journey; also, it is associated with being carried along by the “breath of life,” through the wind in its sails.

TUGBOAT – just as the characters in Becoming Jesse help and guide one another, a tug is a powerful vessel that helps navigate and move other vessels; it connects vessels from sea to port; also, a tugboat can go backward and forward – much like Jesse takes-in long ago stories – that help him imagine how to go forward in his adventures.

MCA: You really were able to tell such a stronger story with the design elements you chose to incorporate. There is a lot of symbolism present within Becoming Jesse, how exactly did you use your light lessons for educational value?

There are many, many more Light Lessons. I’ll just say that Jesse’s Song (The Nature Boy, Nat King Cole) sums them up quite agreeably: “The greatest thing you’ll ever learn, Is just to love and be loved in return.”

MCA: Can you discuss the touchstones of entertaining story-telling that are within Becoming Jesse?

MCA: Tell us about the language fun that is present within Becoming Jesse.

Patsie: Like me, Jesse loves WORDS. Sometimes, I actually just get the words wrong!
When I was in third grade we visited the new air depot, named, “Theodore Francis Greene Airport.”
I delivered a class report, and called the airport: “The Odor Franc Is Green.” (! ! !)
I still make these lingual errors.

Recently, I was in a sports arena named, “St. James”. We went for lunch in their café, which I thought was named, “St. Rivers”.

Our grandson looked at me, looked at the sign, and said, “Grams… it’s not St. Rivers…. It’s STRIVERS!”

So it is right up my alley to have Jesse ‘gargoyle’ his words. Here a few of his MALAPROPISMS:
I can tell you all the perpendiculars. (particulars)
I’m trying to be like the Lion statues at the 5th Avenue Library: Patience and Fort Dude (Fortitude)
That wash-bucketing pirate is traptured! (swash-buckling / (trapped + captured)

Dearie likes to get into the act, too, telling the little girls who had overstayed their welcome: “Go home and tell your mother she wants you!”

Jesse and Dearie also love SPOONERISMS – which is a linguistic trick of switching the beginning of words.
A well-known Spoonerism is from a Theater Usher saying, “Let me sew you to your sheet.” (Let me show you to your seat.)

I found it fun to have my characters make up their own Spoonerisms:

One of my uncles used to greet us with a RIDDLE. Children love playing with brain-tricks like this, especially my Jesse! He solves one puzzling riddle after another, trying to discover the details of his ‘disappeared’ grandmother. Here is one from his book:
A box with no hinge, no key, no lid. Yet a golden globe inside is hidden. (answer, p160 Becoming Jesse)

Becoming Jesse has lots of fun, and lots of shining-Light, in lots of twiddling words!

MCA: There are so many interesting and “new-fangled” words present throughout Becoming Jesse, can you tell us about the originality of those unique words?

Patsie: Yes, I do make up my own words – sometimes when I want a more descriptive word – with just a bit more of a pronouncement from a character. In writing Becoming Jesse, I soon realized that I created so many of them, that I included them in a dictionary at the back of the book. Here are a few favorites from DEARIE’S

MCA: One of the amazing things about Becoming Jesse is that readers of all ages can relate to it. What is the appeal of characters in this story that resonates with readers of any age?

The incorporation of light within “Becoming Jesse.”

Patsie: Six-year-old Jesse O’Neil knows his everyday magic – his inner Light. It inspires so much of his clever fun! Using a kitchen tray, he sleds down a mountain of icy city snow. He escapes Treasure Island pirates, sliding down the spiraling banister in his brownstone apartment. He visits a castle just his size and finds a glorious storybook king. And every afternoon, he helps his best friend sell newspapers on the city street.

In 1947 New York City, Jesse O’Neil is born an orphan. Yet his inner Light knows a wonderlush life with his love-adore grandmother, Dearie, who owns a rollicking theater, and his entertaining young uncle, Conor, who is studying at the Actors Studio next door. Jesse’s world reaches across generations and cultures, especially with an enchanting old storyteller. Add to that a jolly tugboat captain, a spiteful old lady, kind and helpful grownups, and playfully daring children. Jesse calls them his ‘Circle of Lights… his ‘Circle of Love’. First and foremost, Jesse finds his day-to-day charms in the people, but it is also there in the theater, music, classic literature, and gypsy storytelling. They all play their parts to the hilt in this corner of New York City where everyone knows your name.
Now Jesse’s Light discovers a mysterious, ‘disappeared’ grandmother. She’s a puzzle. But Jesse eats puzzles for breakfast! He springs into a quest to find her. Whirling through his shenanigans, he uncorks thrill-digging clues. But he also comes face-to-face with a sinister stranger. Jesse alone must find a way out of his dangerous schemes, even if it means losing the chance to find his grandmother.

Life’s shadows and secrets wriggle about Jesse’s comic charm and soul-lighting wisdom, as he learns the illuminating lessons of his true quest. Real magic works in mysterious ways. It is spiraling through Jesse’s days and nights. Leaving puzzles and riddles and clues. Waiting. For Jesse’s Light.

You are going to want to live here.

MCA: Sounds like an enchanting place to live indeed. Thank you for a wonderful interview Patsie! We look forward to hearing about the sequel to Becoming Jesse, Becoming Jesse – The Quest, very soon!

You can learn more about Patsie McCandless and her award-winning book, Becoming Jesse by visiting her MCA Shop pages. 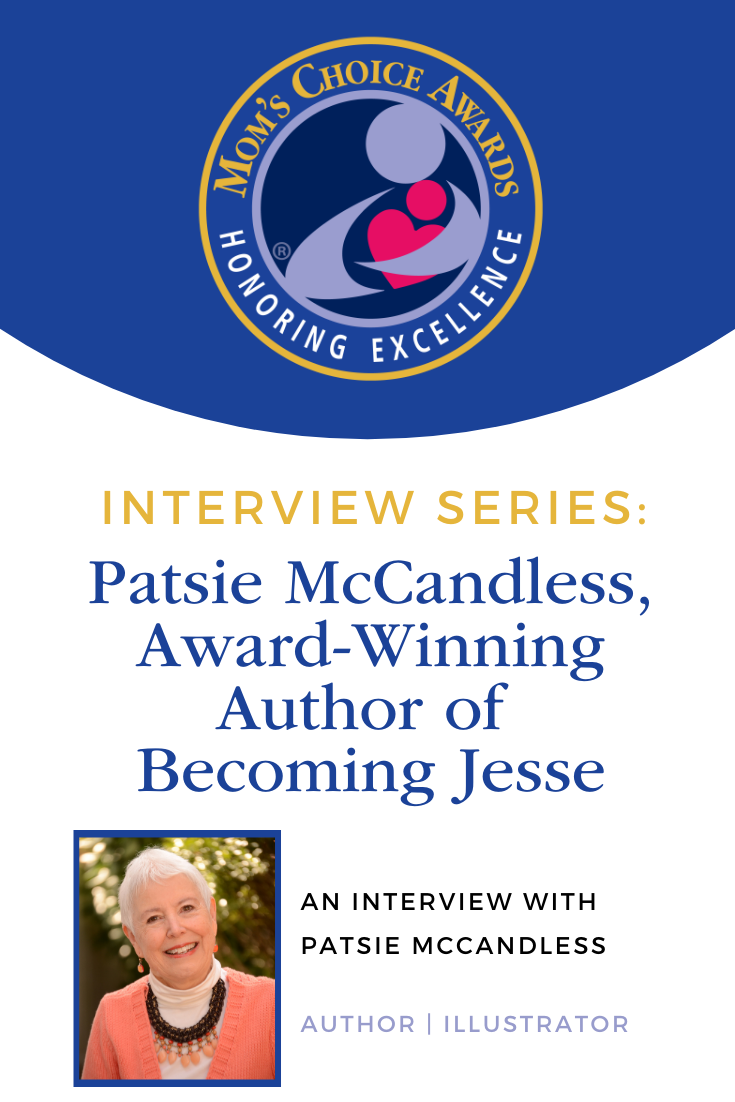