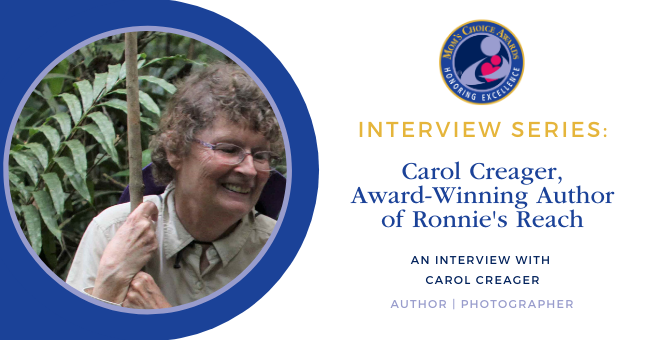 Hello, Mom’s Choice readers! Thank you for joining us for another installment of our interview series. For this installment, we had the pleasure of interviewing Carol Creager, the author of the MCA award-winning book, Ronnie’s Reach. Ronnie’s Reach is one of the ten books of Carol’s that won a Mom’s Choice Awards! Ronnie’s Reach addresses what problems frogs face in the wild, including loss of habitat and capture by humans. Ronnie’s Reach also teaches about the importance of wildlife conservation and how vital it is for humans to do their part in protecting our ecosystems. Keep reading to learn more about Carol and her award-winning story!

MCA: Hi Carol, congratulations on all of your Mom’s Choice Awards! Ecosystems and wildlife are essential to our well-being and prosperity so seeing a book like Ronnie’s Reach that promotes conservation is so important. Can we start the interview by finding out a little bit about yourself? 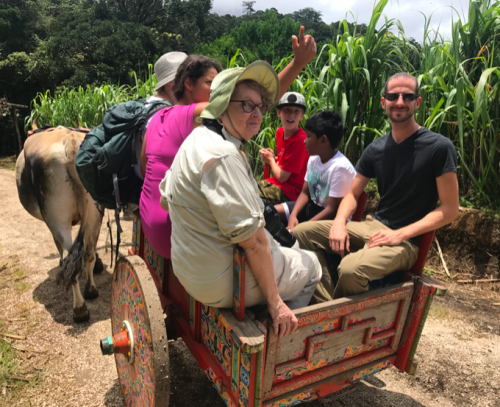 Carol: I was born in Youngstown, Ohio, on October 28, interrupting Mother’s dinner. When I was 9, we moved out of the city into the country. My father and friends built a prefabricated house on 6 acres of woods and wetlands. My mother was a birder, and lots of birds visited the birdfeeders outside the kitchen window while we were eating breakfast. I used to jump over the pines my father and I planted, which are now much too tall. I was a champion runner, broad jumper, and high jumper, but those were my only athletic skills, and no one cared about them. I am hopeless at anything involving a ball.

Before we moved to the country, we hiked the trails of Mill Creek Park and traveled across the United States and Canada. We camped out in a tent before there were many places to camp. Mostly we asked a farmer if we could use the edge of his field overnight.

When I was in college and graduate school, we traveled to Europe and Central America. I crossed Panama by rail beside the Canal. I crossed half of Costa Rica by a narrow-gauge railway, a feat few people can claim because the railway was destroyed by an earthquake shortly thereafter.

While visiting my parents’ friends, I did needlework, even designing three-dimensional pyramids and other historic monuments, until arthritis stopped me.

My photography started with a Brownie camera as a child and continued throughout my life. I have been a photographer since I could hold a camera and point it at something, mostly outdoors.

MCA: That’s a very interesting life you have had! Was it your traveling and photography that influenced your path to becoming a writer?

Carol: As a Spanish teacher, I created exercises using bits of Hispanic history and legend I wrote. Each class had its own project, based on something that happened in class or something in the text that provoked an interesting response in the class. Every project was different and was shared with other sections and often with elementary or middle school classes.

As someone very concerned about the outdoors and traveling to Costa Rica and other Spanish-speaking countries frequently to learn and to photograph, I collected materials, especially photos, to share with my students in presentations in class and for the entire high school.

Frustrated by wordbooks that talked about creatures without showing them, I decided to use my photographs to illustrate PowerPoints so that people could see the beauties of nature and the creatures of Costa Rica. I am still working on that project. I was confined to the school where I lived and taught because I could not leave my mother until her death at nearly 102.

A friend, Cinthya Castellon Miceli, suggested I write children’s books using my photographs. I began with my 3 adventures with sloths and continued with other mammals and birds as well as frogs.

MCA: Well we’re grateful she made that suggestion, your photographs tell excellent stories! What photographs of yours were the inspiration behind Ronnie’s Reach?

Carol: My photos of the red-legged tree frog, which is active at night, often waving an arm to search for a place to go in the dark. This made me think of exploring the world and my own goal, reaching for the stars, using all my talents for others. I am still teaching, my passion. I started explaining about the life of a frog and continued with the dreams inspired by that waving hand and by the frog that kept climbing as high as he could go.

MCA: That’s so interesting to hear how a story was built all off of some wildlife photographs. Ronnie’s Reach is filled with many important messages about conservation and inspiration, can you elaborate on some of those?

Carol:
a. Frogs aid humans by eating mosquitos, flies, and other annoying insects that pester humans.
b. Frogs are easily killed by insecticides, which penetrate their skins.
c. Spanish word simpatico, meaning kind, caring, concerned, understanding, sharing, loving,
supportive, giving. What all of us ought to be.
d. Reach for goals that will help others.
e. Reach for your dreams.

Carol: Two said that it was the best of my books so far and asked for more frog books, which I am working on. I had planned a trip early in 2020 to a great place to photograph different species of frogs, but all trips to Costa Rica were canceled.

MCA: Can you tell us about the importance of conserving wildlife and the environment and why it’s so important to educate the youth? 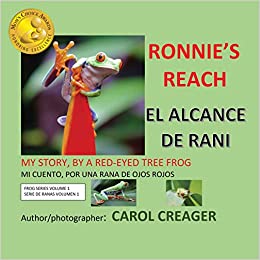 Carol: The environment is being degraded and contaminated rapidly. Wildlife species (such as the famous golden toad of Monteverde, Costa Rica, have vanished. Frogs and toads are especially vulnerable because they inhabit both land (air) and water. They are an early sign of pollution, that will take the lives of many other species farther up the food chain. Who is at the top of the food chain, absorbing pollutants from many sources and thus becoming more susceptible to disease and death? Humans.
Youth grow into adults, who can take action. Young people can be surprisingly effective at initiating and maintaining projects. The Children’s Rainforest of Monteverde, to which a few of my classes contributed by buying acres, is a good example.

Ronnie’s Reach, like my other books, is directed not only to children but also to their parents. Parents should read aloud to babies and youngsters; it helps their children to learn and to want to learn, which is a goal in and of itself. It also educates the mature readers to learn and possibly take action now, before it is too late.

Aside from the threats to people by contamination of air, water, and food, there are so many rewards for children and for their parents by spending time enjoying the beauty and intricacy of nature. Nature can calm the stressed spirit as well as bring sheer pleasure at the beauty, funny antics, and majestic scenery.

MCA: What would be the main lesson you would want your readers to walk away with after reading Ronnie’s Reach?

Carol: Ronnie’s Reach is the story of a frog who has dreams of reaching out for something higher and better. His goal is to do the best he can, always trying to accomplish more. Never give up!

MCA: That is a goal we can all get behind! Thanks for speaking with us, we’re sure we will be hearing from you again soon!

You can learn more about Carol Creager and her award-winning book, Ronnie’s Reach, by visiting her MCA Shop pages. 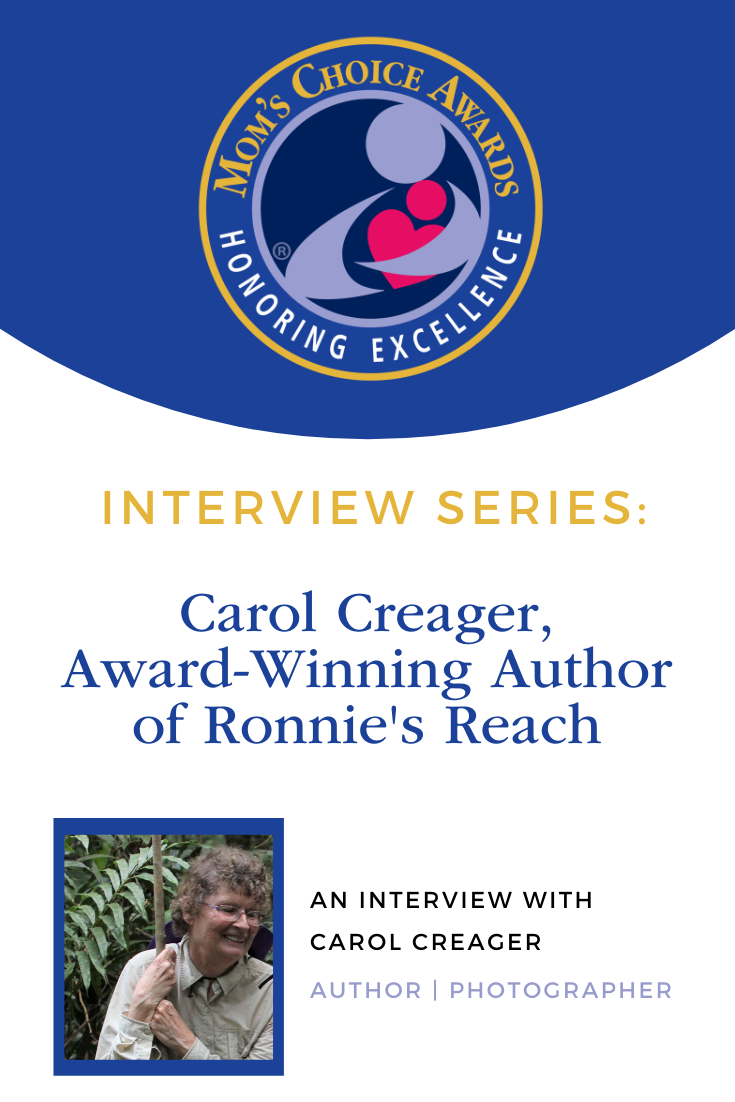