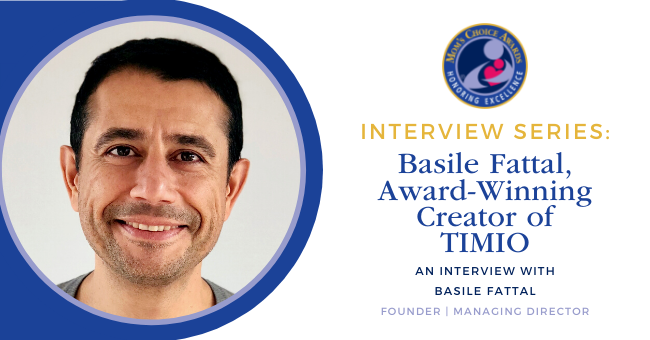 Hello, Mom’s Choice readers! We’re so glad to have you join us for another interview with one of our distinguished honorees. For this interview, we had the absolute pleasure to speak with Basile Fattal, the founder and managing director of the Mom’s Choice Award-winning product, TIMIO! TIMIO is a screen-free, interactive, educational audio and music player which helps children develop their vocabulary, imagination, and cognitive skills in a playful way from the age of 2 to 6. TIMIO is the only screenless interactive educational audio and music player that uses magnetic discs to unlock a library of curated content. In this era of screen dependence and digital over-stimulation, TIMIO is the smarter and healthier alternative many parents have been waiting for. Keep reading to find out more about Basile and his award-winning product, TIMIO!

MCA: Hi Basile, thank you so much for joining us today, and congratulations on your Mom’s Choice Award! In the screen-dominated world we live in today, screen-free children’s products such as TIMIO are such a breath of fresh air for parents, teachers, and caretakers! Can we first start the interview by finding out a little bit about yourself? 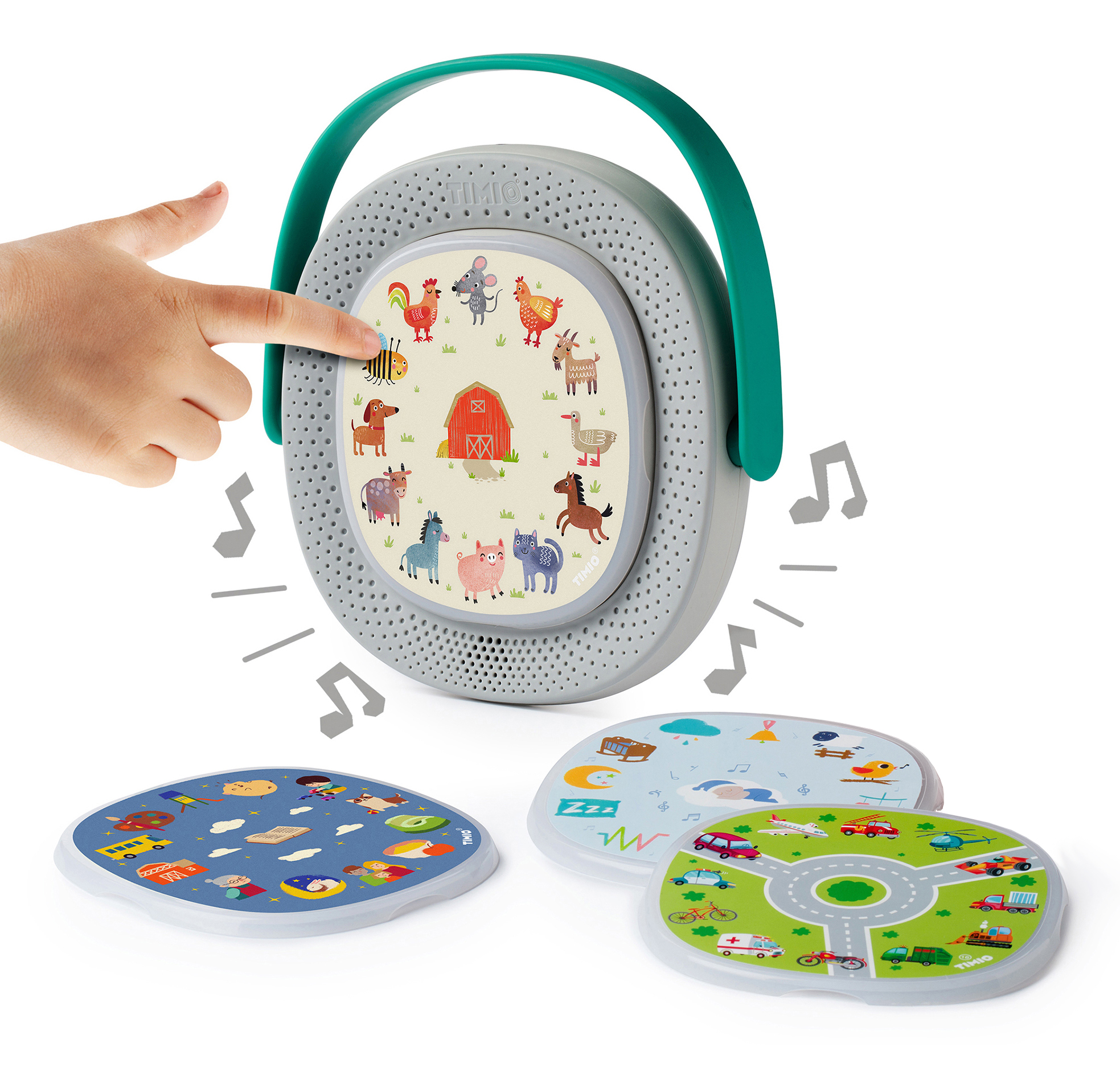 Basile: My name is Basile Fattal, founder and managing director of TIMIO BV. I’m first and foremost a father which has inspired me as an entrepreneur. With a professional background as a marketing manager in consumer electronics, I’m always on the lookout for innovation. As a father who understands the needs of children, I realized that there was a gap in the market for screen-less educational toys that are as entertaining as screen-based devices but not as harmful.

MCA: There is no doubt a gap in the market for screen-less toys in the current digital-obsessed climate. Tell us more about TIMIO and what led to its creation!

Basile: The TIMIO idea was born in 2017 when I realized that my son was spending too much time in front of screens. I wanted to create an audio player that’s screen-free, educational, and interactive at the same time. Having a large network of professionals in the consumer electronics industry, I put together a team of electronic engineers and industrial designers to come up with the TIMIO concept. With another international team of content creators, we built a large library of audio content that’s both fun and educational, including the most popular children’s songs, the most famous stories, and fairy tales, and an extensive vocabulary content to cover all the basic needs.

TIMIO successfully launched on the crowdfunding platform Kickstarter in 2019. Within 12 months TIMIO was already selling worldwide.

MCA: You talked about a screenless educational toy being the main motivation in creating your award-winning product. Tell us what other needs were important to you when creating TIMIO?

Basile: For many years, children could play their favorite songs and stories thanks to LPs, cassette players, and more recently CDs. However, in the past 10 years, the CD industry died while smartphone/tablet streaming took over the audio industry. Children had no other choice than to use screen-based devices to play their favorite tunes. However, it has been proven that when not monitored, screens can be harmful to young children by affecting their sleep, eyesight, and behavior. TIMIO offers children an alternative solution to play with their favorite content independently and in complete safety. Kids as young as 18 months and up to 6 years old can play with TIMIO without any screen time worries.

MCA: That is absolutely fantastic! Tell us about the research that went behind TIMIO’s unique features, and describe these features.

Basile: Inspired by Scandinavian design, TIMIO’s design is very minimalistic. This allows the child to focus on the main functionality, by simply placing a magnetic disc on TIMIO and tapping an image to play a song or a story. TIMIO’s design makes it stand out from typical flashy and noisy toys that drive parents crazy. This minimalism allows children to focus.
While the TIMIO design is simple, it doesn’t lack any of the functionalities that parents and children need. TIMIO has evolved since it was launched on Kickstarter thanks to the direct feedback from parents.

MCA: How is TIMIO different from other audio devices? 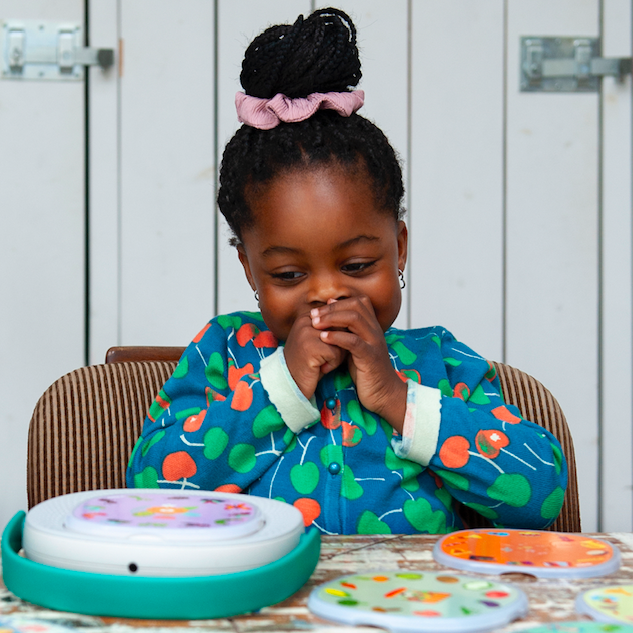 A child playing with The TIMIO Player.

Basile: Unlike other audio devices which focus on one-way listening, like the old cassette or CD players, TIMIO is fully interactive. TIMIO is often referred to as a tablet alternative in its capacity to keep children engaged and its ability to teach children. All the while being 100% safe, being screen-free and featuring curated educational content.

TIMIO is the only device that, besides playing stories and songs, can teach vocabulary with many topics like the alphabet, numbers, colors, or the clock among others. Since TIMIO offers discs with images, the child is able to associate images to words and sounds, making it a true educational tool. With other audio devices, there’s no such image/sound association possible.

TIMIO is also the only audio device that can play its content in several languages, allowing even older children to go back to the “easy” content like colors or numbers and learn them in Spanish for example. This is how TIMIO grows with children from infancy to grade school. The youngest children associate images with sounds, as they grow they listen to songs and stories, and the oldest ones learn languages and answer quizzes. Unlike other audio devices on the market, TIMIO is the only device that works right out of the box. No apps, internet, or setup required. Even grandma can figure it out! : )

MCA: What kind of feedback have you received about TIMIO?

Basile: Parents who purchased TIMIO 2 years earlier contact us to purchase the latest disc sets, and tell us that their child is still using TIMIO after such a long period of time. This proves that TIMIO is a truly versatile toy that allows children to grow and grows with children.

MCA: What is next for TIMIO?

Basile: TIMIO is already selling in 60 countries, but we’re planning to add more content and languages to expand further to reach children all over the world.

MCA: Wow, congratulations! We hope to hear a lot more from TIMIO in the near future!

You can learn more about Basile Fattal and her award-winning product, TIMIO by visiting their MCA Shop pages. 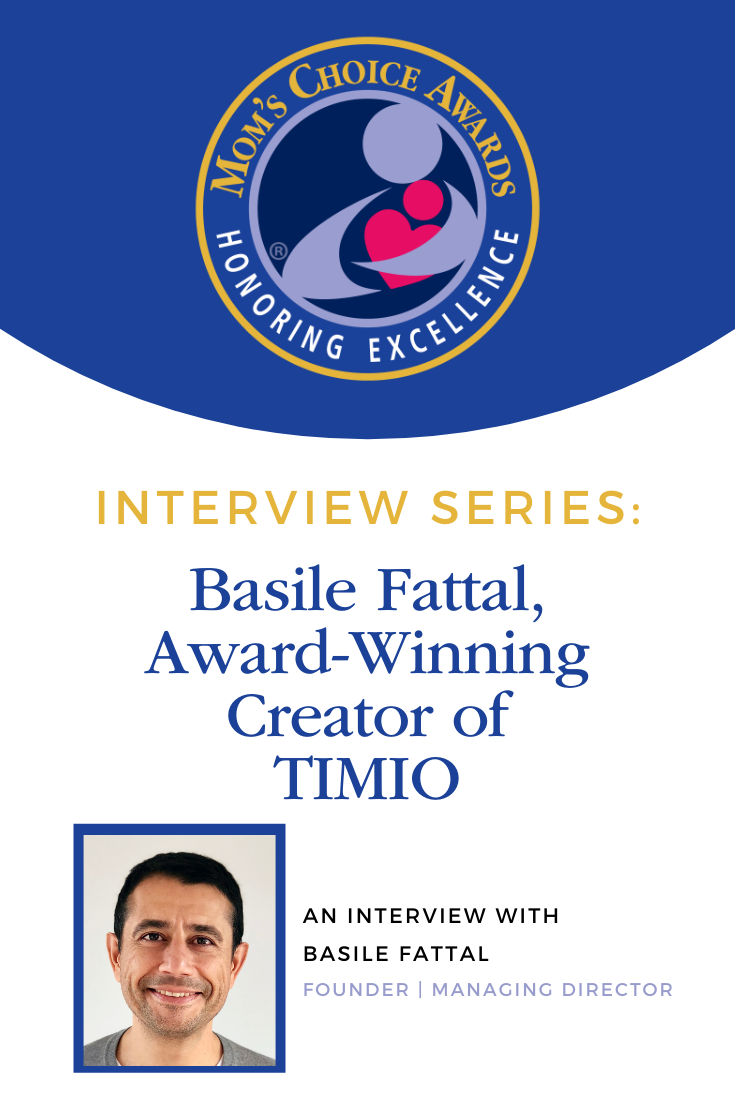