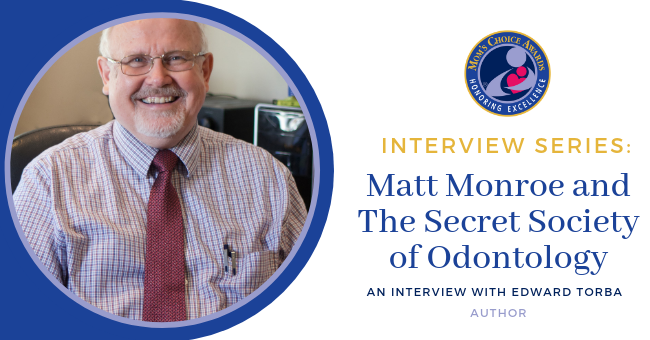 Welcome back for another interview with one of our excellent Mom’s Choice Award-Winning Authors. Today’s installment is with Edward Torba, who, apart from being an author, is a Dentist from Latrobe, Pennsylvania. While Edward excelled in science and math growing up and in school, literature and creative writing were the furthest things from his mind. Little did he know that the stories he came up with to put his dental patients and ease would soon become his passion and gift. Edward loves gardening, traveling, coaching football, and going to amusement parks for fun! Keep reading to find out more about Edward’s book Matt Monroe and The Secret Society of Odontology and what inspired him to write.

MCA: Thanks for taking the time to chat with us, Edward, and congratulations on your Mom’s Choice Award for Matt Monroe and The Secret Society of Odontology! Tell us a little bit about yourself. 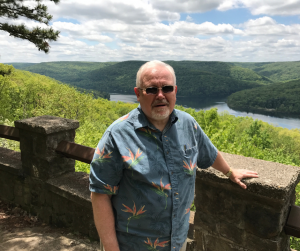 Edward: I was born in Latrobe Pennsylvania and attended the University of Pittsburgh where I received a Bachelor of Science degree in 1973, majoring in Biology. I received my Doctorate in Dental Medicine from the University of Pittsburgh in 1977. Later that year, I opened a private practice of general dentistry in Latrobe (Derry Twp), Pennsylvania with my business partner, Dr Richard Hansen, and still work full-time treating patients; over 40 years of service.

My interest in writing actually began while I attended dental school. Up until then, writing was the farthest thing from my mind. I concentrated on the sciences. Originally, I had planned to become a child specialist, a Pedodontist. However, after eight years of college, I was burnt out academically, and passed on four more years of classes. Dr Hansen and I decided to go directly into practice; no more school!

I have written two other books to date: The Magic Trip, which is a short story about a fictional character, King Molar, and Boys Club Guide to Youth Football. After reading the Harry Potter Series, I was inspired to write a series, Matt Monroe, featuring normal teens who deal with extraordinary circumstances.

MCA: We are so glad you were inspired. What gave you the drive to actually write and publish your books?

Edward: Quite honestly, there is nothing on the market that speaks to children ages 8-13 in an entertaining manner on the subject of dentistry. I felt a book was needed that presented dentistry in a fun and magical way, helping to defuse the fear most people have of the dentist. At the same time, I wanted to write a book that showed the powerful bonds of friendship and family. Hopefully, my book will help children and adults see dentistry in a much more positive light, and even more importantly teach them to treasure their familial ties and close personal
friendships.

MCA: So it sounds like you saw there was a very real need for Matt Monroe. What other events led up to you feeling the need for this type of literature and subject matter?

Edward: While attending the University of Pittsburgh, School of Dental Medicine, I developed a flip chart/picture book for my child patients. King Molar was a big hit with the kids and their parents.

Ever since, family and friends have urged me to write a fantasy book about dentistry. They said I have a boundless imagination. That may be true, but why did they think I could write a book? Having an imagination is one thing, but putting whose ideas down on paper is quite another. Truth be told, I never enjoyed English or Creative Writing in high school or college. They were necessary requirements to get to where I wanted to go…dental school. I was a science major. English was a big waste of time to me. Oh, how wrong I was…if I could have known back then
what I know now.

I politely listened to their words of encouragement, but didn’t act on them. I was a dentist, and private practice kept me busy. I had no time for writing… or more truthfully, I didn’t take the time to write. Then one day the writing bug hit me. I can’t precisely explain what happened, but
the story of Matt Monroe began to bounce around in my head. It literally popped into my conscious mind one day and wouldn’t leave. Any time my mind wandered off or I had a chance to relax, Matt was there. It was as though he demanded his story be told.

Steadily, I began to put his story into words. The more I wrote, the more I enjoyed the process. Writing is a mysterious adventure, when the 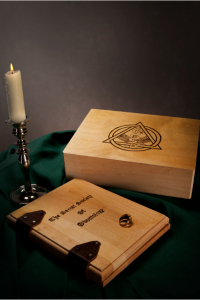 time is right the words just come to you. They pop into your mind and you get credit for putting them down on paper. Fast forward 40 years, and I am ready to release my first fantasy novel. On November 20th , Matt Monroe and The Secret Society of Odontology, will be released to the public. The story is geared for children ages 8 thru 13, but I have been told by close friends who acted as critics while proofing my manuscript, that it is an enjoyable read for any adult who wishes to travel back to a time in their life when magic was possible and limited only by the level of one’s imagination.

MCA: So, obviously, your background in dentistry has so much to do with you writing this book. Tell us a little bit more about that.

Edward: As I stated earlier, I originally wanted to become a Pedodontist. I love working with kids and was naturally drawn to children’s dentistry. Mind you, this was back in the early 1970’s. In dental school, our children’s clinic was rather “sterile” looking, and there really wasn’t (and still isn’t) much in the realm of children’s picture books to help calm and educate a child about the dental experience; this lead to my development of my picture book/flip chart, and eventually to Matt Monroe.

As far as The Secret Society of Odontology goes, it is a utopian organization drawn from my imagination. We do have the American Dental Association, which is a quality group. However, dentistry is in a state of flux due to the inflated cost of education, large box store clinics/franchises, and poor insurance reimbursement. This puts pressure on younger dentists who leave dental school deep in debt (averaging $300,000). Most are not able to open their own office due to this debt burden. Many fall prey to large franchise dental clinics, who offer them their only option: work FOR them on THEIR conditions. My dream is to see The Secret Society of Odontology materialize as a special group of dentists who mentor the new graduate dentists. Instead of helping the Chosen One, they would help the younger dentists financially get on their feet, and train them to practice with the highest ethical and moral standards.

MCA: So, if you could be certain the readers of Matt Monroe walk away with one thing, what would it be?

Edward: When one is alone, challenges can appear daunting and insurmountable. However, when we work with others, using our imaginations for a common goal, we can do anything. Nothing is impossible!

Edward: Matt will be tested again and again. In the second installment of the series, Matt Monroe and The Haunted House, Matt will face an evil that pops up when least expected. Will he and his friends rise to the challenge? You’ll have to read the book to find out!

I am also rewriting the picture book/flip chart I developed in dental school. Not sure of the title yet, but it will be designed to introduce children to the dental experience at age 2.

Thanks to Edward for taking the time to sit down with us! You can visit his website here! 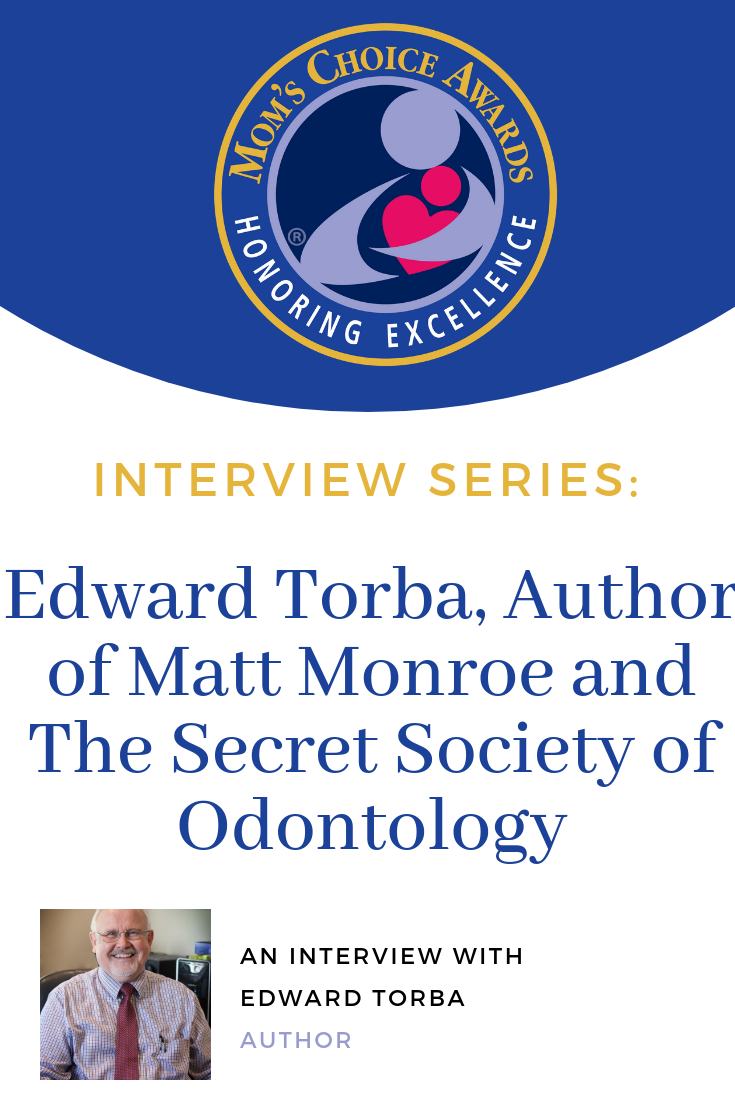 4 Comments on “Interview with Edward Torba, Author of Matt Monroe and The Secret Society of Odontology”