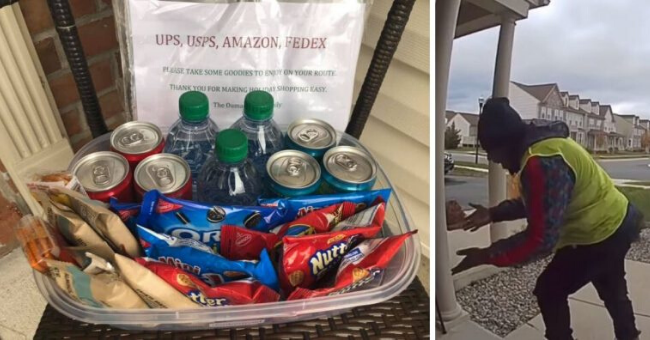 With just two weeks until Christmas, we are well into the swing of the holidays. Amidst the hustle and bustle of holiday shopping, there are certain folks who are working harder than ever: among them, our incredible delivery workers!

You may have seen ideas circulating over the years of ways you can bless the people who are getting your gifts to your front door; mostly by leaving snacks and drinks for them, as they’re working longer-than-usual hours.

One family decided to act on this sweet idea, making their Amazon delivery driver very happy… and in turn, his joy made US happy!

Karim Reed III has been delivering for Amazon for around three months. On this particular day, he had forgotten to pack his lunch. He was starting to feel ill when he delivered packages to the Ouma family’s door. When he saw what Kathy Ouma had left outside, his reaction is priceless.

Kathy, who says she was “just raised this way,” had a spread of snacks and bottles of water placed outside of her door with a note that read, “Please take some goodies to enjoy on your route. Thanks for making holiday shopping easy.”

When Karim saw this, he exclaimed, “Oh, this is nice! They got some goodies. Wow.”

Even better than his exclamations of joy, though, were his dance moves! He says he’s been doing the same dance since he was 7 years old, and it’s somewhat of a signature.

We can’t help but smile every time we see his reaction. Apparently we aren’t the only ones! Kathy Ouma shared that she was laid up inside recovering from a car accident. When she heard Reed’s happy noises outside, it made her feel healed, she said. Not only that, but since Reed had forgotten to pack his lunch that day, the snacks he took (cookies, crackers, and a bottle of water) held him over until he got home that night.

We are grateful for both Kathy Ouma’s kindness and Karim Reed’s joy.