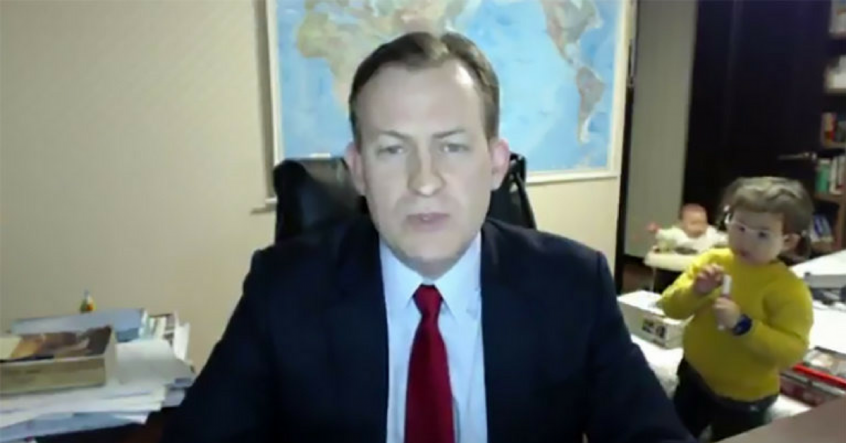 Anyone who has small children is acquainted with a simple fact: you can run, you can hide, you can close doors, but they will find you.

And, as one BBC News contributor found out, they will potentially ruin the most important moment of your career.

This week, Robert E. Kelly, professor of political science at Pusan National University in South Korea, made international headlines; not for the content of his broadcast on BBC News, but for his children’s hilarious on-camera antics.

Kelly was invited as a guest speaker to contribute via Skype to the BBC’s coverage of the impeachment of South Korean president Park Geun-hye. Wearing a suit and sitting in front of a world map in his home office, he knowledgeably answered the interviewer’s questions as they came. All of a sudden, the door behind him swings open and in walks an adorable little girl wearing a yellow sweater.

“I think one of your children just walked in,” the BBC reporter commented, sounding like he was trying not to laugh.

You would think that she was invited to the interview personally by the way she danced her way into the room. Her grandma even said she assumes the little girl thought it was her on the phone call.

Regardless of Kelly’s outstretched arm, attempting to gently direct his daughter to leave the room, the preschooler persisted with a grin on her face. She even appears to be holding and pulling apart a feminine hygiene product. As she bounced and fought for a place on screen against her father’s silent protests, in rolls a smiling 9-month-old in a baby walker, ready to join the party.

The icing on the cake, though, and the most relatable part of the video for many of us, is when mom bursts on the scene. As though her life depended on it, she runs into the room, crouched and ready to snatch her two children. As she pulls them towards the door, books flying off of the bed, the baby’s walker gets stuck in the doorway. It takes some effort to pull him through, but mom comes out victorious, crawling back in as stealthily as possible to finally shut the door.

Kelly is left in the now-quiet room to finish his interview, with something between a smirk and a grimace lingering on his face while he wraps up. Unbeknownst to him at the time, he and his family were about to take the internet by storm, causing parents everywhere to laugh out loud.

The video has been viewed 84 million times, and coverage has spanned from Uruguay to Nigeria to Australia. Everyone wants to know the story behind this comedy of errors. It’s hilarious, it’s quick, and it’s just so absolutely on par with parenting small children.

We’ve all been there. Whether it’s trying to use the restroom in peace or attempting to take a conference call for work, our kids have a deep sense for when we need the most quiet.

If we’ve learned anything from this family’s mistakes, it’s this: lock the door.