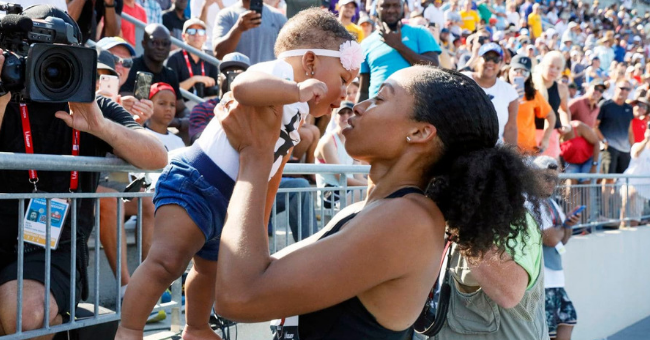 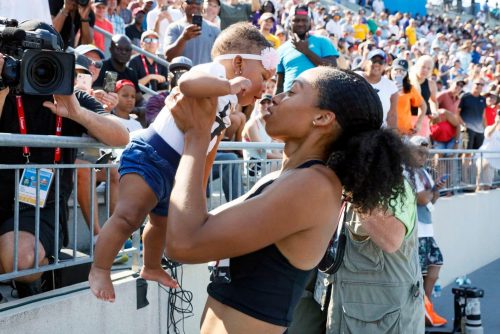 If we needed further confirmation that women absolutely rule, Olympic sprinter Allyson Felix is here to be just that.

Last week, Felix, who is a US National Olympic team sprinter won her 12th gold medal at the track and field World Championships. To put that into perspective, she broke the record of 11-time gold-medalist Usain Bolt, who is the fastest man alive.

What makes Allyson’s feat even more amazing is that less than a year ago- 10 months to be exact- she gave birth to her daughter Camryn via emergency c-section. Her surgery left her with complications, and also left Camryn in the NICU for weeks, fighting for her life. Camryn had a condition called Bradycardia, which causes infants to stop breathing. One day, when Felix was visiting her daughter in the NICU, Camryn stopped breathing altogether.

The athlete’s 12th gold medal was a huge milestone for her, also, because it was her first gold since becoming a mother.

“This victory feels so different because I see it through the eyes of my daughter,” Felix says. “I hope this lets her know that she can do anything she wants and that if she does it like a girl that’s even better.”

I don’t know if you’ve found this in your own life, but even though I’m not breaking any records, I’ve found that becoming a mother has made me a more resilient, braver, stronger person. Allyson Felix feels the same.

“It means that women are unstoppable. We are a force. We create life, we exist, and we have power. I want this moment to be shared with women all over the world,” she says. “With mother’s who are feeling overwhelmed and little girls who feel they are supposed to shrink themselves to fit in. Use your voice. Speak your truth. Change the world.”

Another way Felix is changing the world? She’s challenging the practices of large companies and their maternity policies. She’s been a sponsored Nike athlete for years, but after having her daughter, her sponsor’s offer of pay became significantly less.

Boy, were they wrong.

Felix wrote a New York Times Op-ed denouncing the company’s maternity practices and calling for stronger support of athletes who are also mothers.

Add activist to the list of hats this amazing woman wears.

The sports world was waiting to see who Felix would announce as her new sponsor, and she excitedly delivered: Athleta.

How do you define yourself? ___ We are all so much more than our professions. What are you passionate about? I want to empower women & girls. We can all make an impact in our own circles no matter how big or small they are. #powerofshe

“I think it’s really redefining what sponsorship looks like,” Felix said. “They’re excited to celebrate me as a whole athlete. That’s not just my performance, but being a mother and an activist as well. I’ve really never experienced that before.”

It makes me proud that there are women out there showing the world that being a mother doesn’t take away our value, talents, and abilities. Let’s applaud this strong, brave, outspoken woman for all the things she is, to her family and to the world.Way to go, Allyson!